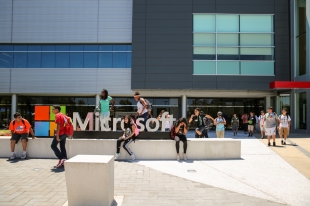 By Tiffany Lam | Special to the Almanac

This summer, 425 kids from under-served communities, such as Belle Haven and East Palo Alto, were on campus at seven private schools on the Peninsula, including Sacred Heart Prep, Woodside Priory and Menlo School.

The students, who qualified for the program (called Peninsula Bridge) by demonstrating their motivation to learn, took courses to expose them to STEM (science, technology, engineering and mathematics) topics.

Peninsula Bridge, in its 25th year, expanded the curriculum of its five-week summer program this year to devote time to these science and technology subjects. In addition to the core academic areas of algebra and language arts, students participated in 50 hours of hands-on science, computer coding, robotics, 3D design, and 3D printing.

Resources necessary to learn in this environment, including laptops, were provided. Students also went on tours of Microsoft, Yahoo, Google, Facebook and Yelp to learn about high-tech career opportunities.

"We have a commitment to Peninsula Bridge to support their programs by introducing youth to Microsoft's work," said Thea Nilsson, Microsoft community outreach manager. "We hope to inspire local students to imagine and realize a better future for themselves and their communities. I'd like them all to return one day as employees."

Jocelyn Swisher of Portola Valley, co-executive director of Peninsula Bridge, pointed out: "We live in a high-tech world where knowledge and confidence in STEM-related fields are now fundamental to career success, not only in Silicon Valley, but anywhere in the world."

Bridge eighth-grader Myriam Leo said hands-on science is fundamental to any subject. "We go outside of the classroom to do science and it opens our minds," she said. "I also learned that science could connect to a lot of different things, like art."

In computer coding classes, students were introduced to Scratch, a free online programming language developed by the MIT Media Lab, which enables young people to program their own interactive stories, games and animations from their computers.

This was the first year that Bridge offered the computer programming elective, available to 100 sixth-, seventh- and eighth-graders at three school sites.

"It's rewarding for the students to see what went wrong with their computer program and then correct it on their own," said Ryan Reiss, a Peninsula Bridge teaching assistant at Woodside Priory.

"It's cool when you see them so engrossed by computer programming," added Jack Swisher, another teaching assistant.

Over the past 25 years, 95 percent of students who attended Peninsula Bridge sessions over four consecutive summers have gone on to graduate from high school on time, Bridge officials say.

The program's objective this year was to prepare students to attend college through a STEM-focused curriculum, according to Maureen Garrett, development director for Peninsula Bridge.

"By making the experiences interesting and relevant to the students' lives, we hope that they will develop an interest in pursuing STEM-related classes in high school and college," said Ms. Swisher.

For some students, this seems to be working. "The coding elective has helped me get a head start for next year," said Bridge eighth-grader Ivan. "I could even see myself coding for my career."

In addition to its summer program, Peninsula Bridge added a transitions program during the school year (from September to May) with Saturday workshops geared to help eighth-grade Bridge alumni transition to and navigate high school. The workshops cover topics like choosing the right high school, time management and financial literacy.

Peninsula Bridge students come from 30 public middle schools across San Mateo and Santa Clara counties, and reflect the demographics of communities the program is targeting, including those with Latino, African-American, Asian and Pacific Islander populations.

Visit peninsulabridge.org for more information on the Peninsula Bridge program.

The first few seconds after awakening; before I remember the virus
By Chandrama Anderson | 0 comments | 3,264 views

Can you stay healthy without making more trash?
By Sherry Listgarten | 6 comments | 2,650 views

Think about helping others in our coronavirus-affected area
By Diana Diamond | 6 comments | 2,479 views