Competitive riding is a way of life for local family

Behind the scenes at the Menlo Charity Horse Show 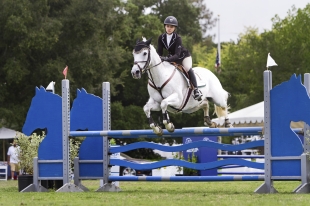 Sofia Jain competes in the Menlo Charity Horse Show's amateur children's class on Jean Claude, a leased pony that has won a number of championships this year with Sofia as his rider. (Photo by Michelle Le)

Flying: How much is enough? It's personal.
By Sherry Listgarten | 5 comments | 1,543 views