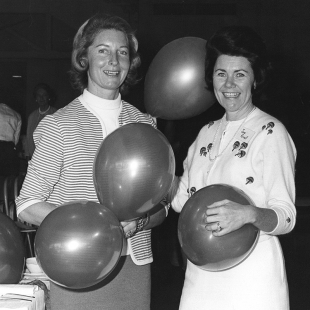 By Robin Hindery Enan of Menlo Park, a member of the 2015-2016 Junior League of Palo Alto-Mid Peninsula Project Development Committee.

Like many of the well-established companies and nonprofits in our region, the Junior League of Palo Alto-Mid Peninsula started off small and scrappy. In 1942, wartime rationing led to a limited supply of gas across the country, and the suburban members of the Junior League of San Francisco were finding it difficult to get to meetings and events. The organization formed auxiliaries in San Mateo, Marin and Palo Alto, with groups ranging from about 10 to 30 women gathering informally in each other's homes.

In 1965, the Palo Alto auxiliary became the Junior League of Palo Alto – the 208th League in the Association of Junior Leagues International, with 391 members. Five years later, the organization renovated the historic Latham-Hopkins Gatehouse in Menlo Park to serve as its official headquarters.

Today, the Junior League of Palo Alto-Mid Peninsula (the new name was adopted in the early 1990s to better reflect membership demographics and the communities we serve) has approximately 900 members. We've poured tens of thousands of volunteer hours into nearly 100 community projects – some of which we nurtured from inception, including The Tech Museum of Innovation, Rebuilding Together Peninsula, the Rosalie Rendu Center, and the Daybreak Program for Homeless Youth.

In addition, our grants have supported nearly 200 local nonprofits, and our members have received valuable training that has catapulted them into leadership positions in the business world, on local and national boards, and in the public sector.

The JLPA-MP is also one of 17 member Leagues in the Junior Leagues of California's State Public Affairs Committee (SPAC), a nonpartisan education and advocacy organization.

Leading up to our current focus area, launched earlier this year – empowering girls to be leaders in science, technology, engineering and math – the JLPA-MP concentrated its community work on "The Health and Education of Children and Youth," and, later, "Developing the Potential of Families."

To finance our community efforts, we rely on member dues, our Endowment Fund, and The Shop, our resale boutique at 785 Santa Cruz Ave. in downtown Menlo Park. We've also put on a dizzying array of event fundraisers over the years, including fashion shows, holiday boutiques and our hugely popular Finishing Touches Home Tour. (We're already hard at work on a unique new fundraiser that will take place next spring and is sure to shake up the traditional dinner-and-dancing model.)

None of our past accomplishments would have been possible without the tireless dedication and passion of our members, and we're always eager to welcome women of all ages who are interested in making new friends, developing leadership skills and, most importantly, giving back to this wonderful community we call home.

Visit thejuniorleague.org to find out about upcoming open house events and socials, or to read more about who we are and what we do.

Why is it called Junior League?

Today, the Junior League encompasses more than 150,000 women in 291 Leagues in four countries.

Over the past decade, many Leagues have gone "age silent," eliminating upper age limits for membership; the Junior League of Palo Alto-Mid Peninsula did so in 1997 after previously requiring that members join by age 37 and "go sustaining" by age 40. (Sustaining members enjoy most privileges of membership but cannot vote or hold office within the League.)

Membership in the Junior League of Palo Alto-Mid Peninsula is now open to any woman age 21 and over, and members may remain "active" for as long as they continue to fulfill League requirements.

Singapore's oldest cafe was about to open in Palo Alto. Then, the coronavirus hit.
By Elena Kadvany | 2 comments | 4,949 views

A Pragmatic Approach to A Trillion Trees
By Sherry Listgarten | 4 comments | 4,145 views

Repairing a Disagreement with your Beloved & “Physical” vs. “Social” Distancing
By Chandrama Anderson | 2 comments | 2,828 views

The University of California’s flexible policies during COVID-19
By John Raftrey and Lori McCormick | 6 comments | 2,714 views