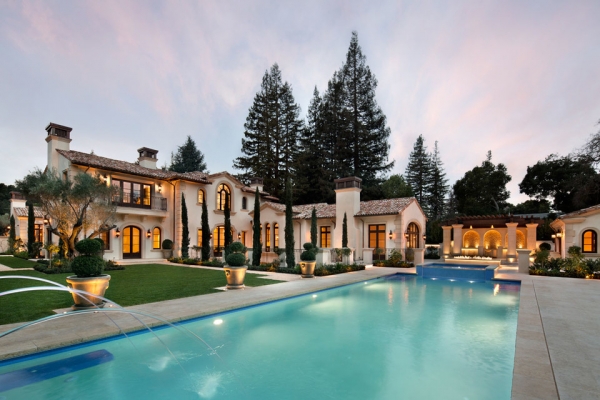 For three years Atherton's 94027 ZIP code has been listed by Forbes magazine as having the highest home prices in the country, but now the PropertyShark.com real estate website says based on actual sales prices, Atherton was second in 2015, far behind Sagaponack, New York.

The Forbes rankings are based on asking prices rather than actual sales prices.

Other Peninsula ZIP codes on the PropertyShark list include:

There is still hope for Atherton challenging Sagaponack this year. Zillow shows Atherton currently has these two listings:

Nearby Woodside, which also has skyrocketing housing prices, often does not appear on such lists because it shares its 94062 ZIP code with a big chunk of Redwood City and unincorporated areas.


For three years Atherton's 94027 ZIP code has been listed by Forbes magazine as having the highest home prices in the country, but now the PropertyShark.com real estate website says based on actual sales prices, Atherton was second in 2015, far behind Sagaponack, New York.

The Forbes rankings are based on asking prices rather than actual sales prices.

Other Peninsula ZIP codes on the PropertyShark list include:

There is still hope for Atherton challenging Sagaponack this year. Zillow shows Atherton currently has these two listings:

Nearby Woodside, which also has skyrocketing housing prices, often does not appear on such lists because it shares its 94062 ZIP code with a big chunk of Redwood City and unincorporated areas.

I was AMAZED to find this new listing for a "spec" mansion only two blocks from my house for $42.8 million -- not sure what to think. Next door to it is another property that is ready to be "redeveloped", could be the same scenario; and another vacant lot (or 2) down the same street, awaiting its future. Whew.

Is this supposed to be good news or bad? Frankly, it grosses me out. People are entitled to have the home of their dreams and spend their money on what they want, but something in our society has gone seriously wrong when some people can afford $42.5 million and others can't afford to buy anything. Or if they do buy a house they couldn't get financing on more than $100,000. That's not a matter of laziness vs. diligence. It's because the decks have been stacked against them -- overnight Zillionnaires throw around their Monopoly money and drive up prices, while Tom DeLeon sponsors Chinese buying sprees.

We are becoming an oligarchy rather than a democracy. Like the days of the robber barons when the working class was forced to buy their goods at inflated prices from the company store. The top 1% owns 40% of the nation's wealth, and that inequality is what leads to revolutions. Middle class small business owners are being squeezed to pay their workers a $15 minimum wage while the Lords of the Italian Villas are paying undocumented workers $20 a week to mow their vast Green Acres. Not because of their industry or genius, but because they were sitting at a desk when the company went public, or pacing at their treadmill desks making millisecond trades that benefit no one but themselves.

If someone can afford a house so large it takes a GPS to find the kitchen (6 en suite bedrooms, a palatial master suite, and a 2,000 sf guest house) for them and their two elementary-aged children, they could consider buying a house half the size and half the cost, and setting up a Foundation to fund job training, catastrophic medical expenses, or food.

Congratulations, Atherton and Sagaponack, for proving it's possible to have too much money.

From an Almanac story the other day:

"I'm here today, unfortunately, because I'm really sad and somewhat angry as well," (the 92-year-old) told the council. "And why? Because I and hundreds of others valley residents are being essentially uprooted and evicted. ... We know Menlo Park is a super affluent community, but does that make it OK to dump all renters unless they can pay up?"

Wow. People who fought for their country have to get out of town while the welcome mat is out for people who fell into millions from companies that make nothing. There's something to be proud of.

Thanks for writing what I couldn't, @LetThemEatCake... I started a similar posting yesterday on the WWII veteran, but couldn't organize my thoughts as well as you did here. I'm conflicted because I believe in free market principles, but things have effectively gotten out of hand. Both sides of the issue have merit, but I don't know how you come to the conclusion that we just let this happen in our community... it's fair. BS.

Additionally what I see is hundreds of middle management-types at blue chips around here that are nothing more than headcount managers and PPT deck authors. They provide little to no value to their companies, but they certainly know how to pull large paychecks and self-protect. These people not only can't do the work themselves, they import talent starkly contrasting their own skill-sets to compensate. When I look around, these are my home owning neighbors.

My bias is that I'm one of the grunts that can do a little of everything and exceptionally well... but I'm young... so I wait my turn and rent a 1/1 for a few grand in the meantime (and I feel thankful to do it). I don't need them; they need me, but I have little/no power to incite change. I am ashamed to be a part of it.

Time to re-read Veblen's The Theory of the Leisure Class and Karl Marx's Das Kapital.

'I'm conflicted because I believe in free market principles, but things have effectively gotten out of hand."

In a free market, there will always be very rich people who are able to buy very grandiose things. But to paraphrase Winston Churchill, free market capitalism can be viewed as the worst system there is until you consider any other. There have been various experiments with Marxism in the world over the same past century and they decidedly have not worked.

Reread...? History lesson...? What do one-offs from 50+ years ago have to do with the status quo? I like data... and samples size of tens or less don't... mean... anything. We can use the past as data points, sure, but to copy-paste entirely is foolish. What if... and I'm going to blow your mind here -- if you're open to it -- the ultimate solution is evolutionary and a hybrid of many theories? Wha?!

Saying things are fine because the are relatively good against a century ago (especially when we've seen 2+ exponential eras in that time) is f'ing lazy. Are we supposed to be done trying to be better?

for transparency, can you all list your net worth with your postings? i'm in the red (student debt). i was a homeless teenager and now i rent in the 2nd most expensive zip code from a foreign owner who claims the property is his primary residence for tax purposes. yay me!

a suit (or black turtleneck) leans over to a poor guy and whispers, 'you're fine, things are fair, trust me, it could be worse, just work harder'

the next time the rich truly acknowledge all the backs they earned their wealth on, the loopholes they jumped through, the foundation they inherited, or the rules they broke will be the first time

there's a baseball stat wins above replacement (WAR). consider its purpose. do you truly think you're so special that you earned your worth above and beyond others? more likely, you're part of a privileged class, you were born already on 3rd base, and/or you got lucky... while someone that is smarter, more hardworking, and a more thoughtful citizen lives on the other side of the tracks

"... the people you are after are the people you depend on. We cook your meals, we haul your trash, we connect your calls, we drive your ambulances. We guard you while you sleep. Do not... f*** with us."

Woodside's property rights activists are always crying about not being able to develop their properties enough to keep up with Atherton's skyrocketing prices. First I'd like to say: Go live there, fools. And what's more, they're wrong, as this article points out: "Woodside, which also has skyrocketing housing prices, often does not appear on such lists because it shares its 94062 ZIP code with a big chunk of Redwood City and unincorporated areas."

"There is still hope for Atherton challenging Sagaponack this year."

Hope? There are no winners in this contest.

Then, believe it or not, Trump.

Unless Trump orders the jcs to do something stupid (yuge!) and in order to prevent WWIII, we have our first coup.

I honestly think Trump will be marginally better for workers than cruz or clinton. Insane. Thats how corrupt the righties and centrist dems are.