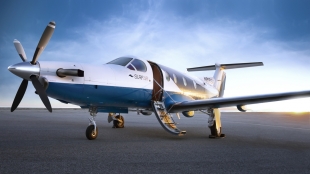 The airline, which offers unlimited flights for a monthly fee, has been expanding since it first came to the San Carlos Airport in June 2013.(Photo courtesy Surf Air)

When will somebody stop this guy? While nobody is paying attention, he's taking over the skies over the Bay area.

The airline has no control over its flight path or elevation after takeoff. That is mandated by the FAA. I cede that they have control over increased flights.

But to buy a house near an airport then complain about its noise seems ridiculous. I get it. You bought an expensive house. You want it to be quiet. So you want the airport that preceded you to change. Sorry, that's not how the world works.

In case the you are unaware, SJC is an international airport with heavy jet traffic. Those jets make far more noise than a PC-12. The people that still live under the approach to SJC get far more noise from those jets than Surfair will ever produce. By the way, much of the housing under the approach was purchased by the city years ago and torn down.

Report Objectionable Content
Email Town Square Moderator
11 people like this
Posted by mary
a resident of Atherton: West Atherton
on Apr 5, 2016 at 4:09 pm

dear james, i did not buy my propery in a flight pattern. i agree that people who buy near an airport or in the flight pattern have no right to complain. again, james, i did not buy in a flight pattern but i am in one now and a noisy one. there have been times when it sounded as though the plane was going to come into my home. there have been times when planes have flown over my home every 20 minutes. so, james, it is royally unfair that this is happening and no one seems to know how to stop it.

Report Objectionable Content
Email Town Square Moderator
3 people like this
Posted by Menlo Voter.
a resident of Menlo Park: other
on Apr 5, 2016 at 7:45 pm

you did buy a home in relatively close proximity to THREE international airports and numerous smaller airports. Did you honestly believe you wouldn't have aircraft flying over your home? Really?

Plane noise was not a problem in my area til Surf Air came along. Now I am being told I live near airports, I better get used to the noise, I am a complainer, and somehow I am standing in the way of progress.

I am glad I am not the only one who is up in arms.


Report Objectionable Content
Email Town Square Moderator
7 people like this
Posted by other
a resident of Atherton: other
on Apr 5, 2016 at 9:07 pm

John, Suggest you write to or call your supervisors, Slocum, and Horsley seem to be taking the lead on this. You can also join the petition against SA's expansion. Or contact Gretchen Kelley manager at SQL, She is a very reasonable woman and willing to discuss. 650-573-3300

As an FYI, Surf Air is pre ordering 50 new aircraft, Flights into SQL will go from 20 to 40 a day by this summer. Beyond that no limit on more flights.

Especially unfair to the ESL residents, least likely to complain but get the brunt of the noise in the N. Fair Oaks, area the closer you to get to Woodside road the more ESL's and more noise. Wonder if Supe's are reaching out to them.


Don't waste your time contacting your supervisors. There is noting they can do and they know it. This is all political theater so they can appear to be "doing something." The FAA has the say so, not the board of supervisors.

Menlo Park voter: Yes, we CAN do something about the noise. Two days ago, U.S. Representatives Eshoo, Farr, and Speier issued a press release announcing the formation of the new Select Committee on South Bay Arrivals. Here is some info from SkyPossepaloalto:
Please use stop.jetnoise.net to report aircraft noise. You can do it from your smartphone, iPad/tablet, or laptop (see below for details on how to use stop.jetnoise.net). Sky Posse Palo Alto www.skypossepaloalto.org

let me know how that works out.

Flying: How much is enough? It's personal.
By Sherry Listgarten | 5 comments | 1,548 views