Measure H will fund facility repairs and upgrades throughout district 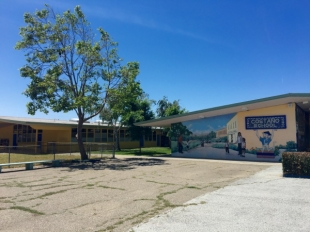 Costano Elementary School on Fordham Street in East Palo Alto had to close temporarily in December 2015 due to a gas leak and an "aging" electrical system that could not support portable heaters in the classrooms. Photo by Elena Kadvany.

How many school bonds are on our tax bill now?

Hi Joan. Unless your property is in the Ravenswood School District, this bond will not be assessed to your property. I am glad to see that the Ravenswood District getting some funds that will ultimately help a student population that struggle greatly compared to their affluent peers in the other neighboring districts. One bond or parcel tax will not resolve the issues facing Ravenswood students but it is a start.

Like this comment
Posted by Jack Hickey
a resident of Woodside: Emerald Hills
on Jun 9, 2016 at 11:12 am

From information provided to me by Ahmad Sheiksoleslami, MPCSD Chief Business & Operations Officer, I have calculated that service on that debt, which is paid for from your property taxes, is scheduled to average $10.43 Million/year for the next 25 years. Watch for it in your next tax bill. And pray that the current real estate bubble doesn't burst.

A spreadsheet which I have created, "MPCSD Annual Debt Service Schedules" is available on request from jack@xshcd.com I will also include the communication from Ahmad.

Like this comment
Posted by Jack Hickey
a resident of Woodside: Emerald Hills
on Jun 9, 2016 at 11:16 am


I forgot to mention that property taxes collected for debt service on the MPCSD bonds does not pass through the district's budget. If it did, it would reveal an additional $3,000 per ADA.

Report Objectionable Content
Email Town Square Moderator
7 people like this
Posted by Libby the Libertarian Libertine
a resident of Atherton: West Atherton
on Jun 9, 2016 at 12:58 pm

"I forgot to mention"

Yes, some posters forget to mention quite a bit. We "forgot to mention" that the above poster has not made a post on this site suggesting he approved of any bond measure to improve our schools, our quality of life or our community. Ever.

Not a one. Compared to negative comments on virtually and measure since this site went up over a decade ago.


Ya know, Jack, there are other states that pay little tax and offer even less service.


Web Link Where Republicans Went Wrong in Kansas -
Governor Sam Brownback confronted a fiscal crisis of his own making, and nobodyâ€™s happy with the outcome


and most current, from Bloomberg, how so-called libertarian tax ideals fail in untold ways


Web Link Taxpayers Call Themselves Businesses as Kansas Tax Plan Founders - "This is only going to get worse." State Representative Mark Hutton


Some folks want to build upon our great community and support future generations of Americans.

Report Objectionable Content
Email Town Square Moderator
Like this comment
Posted by Libby the Libertarian Libertine
a resident of Atherton: West Atherton
on Jun 9, 2016 at 1:00 pm


I didn't approve of Measure A, the "Best Schools Proposal" in 1991 either. Neither did the voters as they overwhelmingly defeated this 1/2% sales tax which would have funded yet another bureaucracy.
See: Web Link

Anne Le Ziblatt, formerly of Tamarine and Bong Su, is back with a Vietnamese noodle bar in Redwood City
By Elena Kadvany | 7 comments | 3,541 views