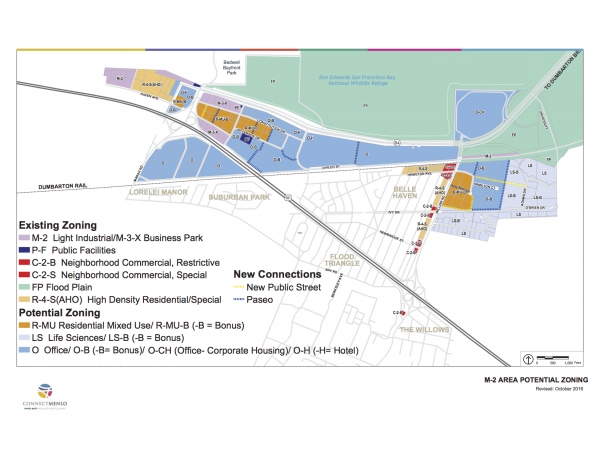 A map of the zoning changes that were approved by the Menlo Park City Council Nov. 29. (Map courtesy city of Menlo Park.)
Previous Next

After two years and more than 60 public meetings, a set of policies for what can get built in Menlo Park has been approved by the Menlo Park City Council.

On a 4-1 vote, with Councilman Ray Mueller opposed, the council agreed Nov. 29 to make major changes in the city's general plan for development. The council was scheduled to give final approval to the changes at its meeting on Dec. 6.

Such development will add to Menlo Park a total of 11,570 residents and 5,500 workers between now and the year 2040, the general plan predicts.

While the plan is expected to be good until 2040, a city's general plan should realistically be updated every 15 to 20 years, said City Manager Alex McIntyre, since even the best predictions don't always accurately foresee future needs.

The general plan update project, which had been set back from its original completion date by several months, comprised thousands of pages of data and feedback accumulated over many hours of public meetings.

A few last-minute items were added:

&#bull; Rat poisons will be banned from use, at the request of Councilwoman Catherine Carlton.