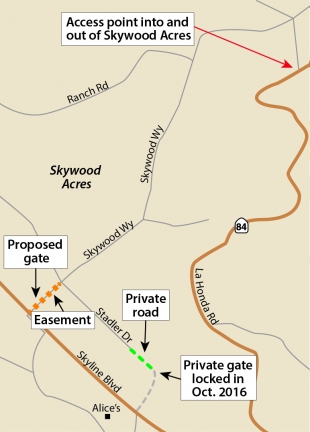 With one way into and out of Skywood Acres after the October 2016 closing of a private gate that had been open for decades, the residents and the town are considering creating a second entrance at Skyline Boulevard, but legal technicalities are complicating the matter. (Map by Kristin Brown/The Almanac)

Personal Responsibility comes in to play: did they look at a map before they purchased?

And then: "...responding to Skywood Acres residents concerned about cut-through traffic"

Foresight, folks. This should be on you, not the town.

I think this is an issue in several neighborhoods, such as Bear Gulch Road in Woodside. Safety should come first, fire access (or escape) should be top priority. I've seen many roads gated since I grew up in old Woodside, often so horses can pass through, but not cars.

May get worse over time: Web Link

Sorry folks, you don't get to have your own remote controlled gate on a public road. Go buy into a gated community if you want that. But the concern about who holds the keys for an emergency gate is an easy one to solve: do what Portola Valley does for all their emergency gates. Use a combination lock and freely share the combination with residents. Thus in an emergency any resident can open the gate up for egress; in all other situations it stays closed.

Report Objectionable Content
Email Town Square Moderator
2 people like this
Posted by one of the residents
a resident of Woodside: Skywood/Skylonda
on Apr 27, 2017 at 10:48 am

My response is to Mr or Mrs Q comments. Yes, we ALL analyzed at the maps and all data available when we bought our properties. The closing of the two additional gates was done AFTER several years we were there. The Town has admitted that they did not consider the rights of the residents of Skywood when they took action.

Woodside Councilman: "We, as a town, royally screwed up when we vacated the (easement) rights."

Sounds like a parcel tax on skywood is in order. Should have paid attention.