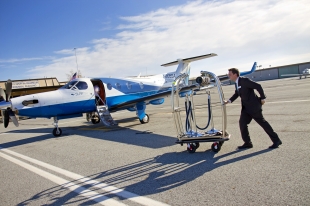 A Surf Air employee pushes a bag cart away after passengers boarded a flight to Santa Barbara at San Carlos Airport on Nov. 22, 2013. (Almanac file photo by Michelle Le)