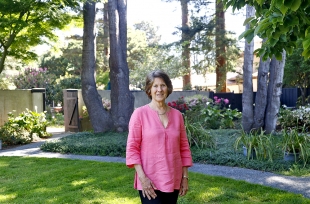 Judy Sleeth, a 2017 Lifetime of Achievement honoree, at her Atherton home last month. As a teacher, a docent and the founder of the nonprofit Art in Action, she has inspired a love of art in thousands of students nationwide. Her arts curriculum serves 70,000 students at 500 schools in 18 states. (Photo by Veronica Weber.)

Congratulations Judy for all of the years of giving to the kids and the community. You set a wonderful example. I wish you years of best wishes and good living.

2 people like this
Posted by Sandy Crittenden
a resident of Atherton: Lindenwood
on May 22, 2017 at 2:40 pm

Judy's dedication to Art in Action and all she has done is commendable. She is a role model we all should strive for.
Kudos to her for a well deserved recognition.

Way to go Judy! Your volunteer work in Art in Action is a wonderful example for all of us. Our children appreciate
the work you have done for them.

Report Objectionable Content
Email Town Square Moderator
2 people like this
Posted by phillemansky
a resident of Atherton: West Atherton
on Jun 3, 2017 at 4:38 pm

phillemansky is a registered user.


Congratulations to Judy for her achievements! As a former Swiss resident myself, I am happy that she had the chance to be in touch with the educational system over there, which in some ways leaves a larger part to arts than it does in the US. But then again, some schools are better than others.

Van Gogh's flowers is a great example, and I think this piece is universal enough to help even young children become aware of the power of arts in their lives.

Thank you for everything

Flying: How much is enough? It's personal.
By Sherry Listgarten | 5 comments | 1,525 views