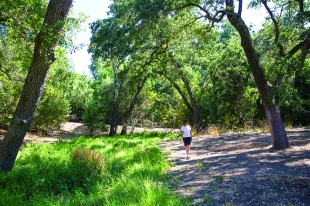 Leslie Ballinger walks through her Woodside meadow on Winding Way, being restored to native plants and grasses. (Photo by Michelle Le/The Almanac.)

By Kate Daly | Special to the Almanac

When Leslie Ballinger moved to Woodside 19 years ago, about a third of the family's three-acre property on Winding Way was "very wild ... gorgeous in February and March, and then dead in April with an infestation of purple thistle" that had to be mowed each spring.

When she heard about a local expert who could help her turn the acre into a meadow full of native flowering plants and grasses that bloom at different times of the year and need little water and no mowing, she hired him.

Craig Dremann, who specializes in ecological restoration with his company, The Reveg Edge in Redwood City, refers to this work as a "conversion" to what the Peninsula might have looked like some 250 years ago.

His goal is to get rid of "European weeds" – such as ripgut brome, foxtails and wild oats grass that arrived in the area with the Spaniards as seeds, hay, straw, or "in their animals' bellies" – and return the land to native cover.

In general, he says, yards in Woodside contain about 5 to 10 percent native cover, most likely in places that are not landscaped, irrigated, and/or overgrazed.

A seasonal creek cuts through the Ballingers' meadow, usually drying up in August and September, but otherwise running into a culvert on Manzanita Way, which is all part of the San Francisquito Creek watershed.

When Mr. Dremann started working on the property in March 2016, Ms. Ballinger says, the creek was "choked out by invasives such as blackberries, mint and non-native yellow irises."

"When you get to over 50 percent it starts fixing itself," he says, explaining how dormant seeds that might have been buried underneath weeds for decades can resurface, take hold and propagate.

Mr. Dremann was particularly thrilled when miner's lettuce naturally started popping up on the site because he says it kills weeds better than any other plant if left alone to go to seed.

The first step toward the meadow's conversion involved a work crew working last summer to remove invasives and non-natives. He says ripgut should be hand-pulled, but that a weed whacker is the best tool for mowing most weeds when they are green, followed by raking up the pieces and disposing of them.

The next step was to sow seeds and plant seedlings of meadow barley, blue wild rye grass, yellow monkey flower, tiny tips, lupin and other natives to help stabilize the creek.

Ms. Ballinger says the process included "a very methodical placing of drain rock to prevent erosion ... and allow natives that were planted along the creek to grow up through the rock."

The town of Woodside sent the Ballingers a letter of concern when someone noticed the presence of new gravel and wondered if it could potentially block the culvert.

Shortly thereafter an inspector from the California Department of Fish and Wildlife came to examine the situation and allowed the project to continue.

Aside from the purchase of hundreds of plants from Watershed Nursery in Point Richmond, monthly weed removal accounts for most of the several thousands of dollars spent so far.

Mr. Dremann estimates hundreds of manpower hours have already gone into the project, but that progress has been made "faster than I imagined. ... it's probably the easiest acre I've done in 40 years."

One reason is the soil's good health, which he ascribes to the fact the yard is wooded and probably wasn't overgrazed like some of the more open portions of Woodside and Portola Valley. He uses Waypoint Analytical lab in San Jose to check soil samples and found the Ballingers' land didn't need much amending.

Ms. Ballinger is happy with the way the meadow is shaping up, and delighted to hear some neighbors have expressed interest in doing the same thing with their fields. She's hoping ecological restoration on surrounding properties will cut down on the chances of weed seeds being transported back in by animal, wind and water, and lead to a more natural looking neighborhood all the way around.

Jon Castor is a registered user.

Singapore's oldest cafe was about to open in Palo Alto. Then, the coronavirus hit.
By Elena Kadvany | 2 comments | 5,045 views

A Pragmatic Approach to A Trillion Trees
By Sherry Listgarten | 4 comments | 4,153 views

Repairing a Disagreement with your Beloved & “Physical” vs. “Social” Distancing
By Chandrama Anderson | 2 comments | 2,831 views

The University of California’s flexible policies during COVID-19
By John Raftrey and Lori McCormick | 6 comments | 2,718 views