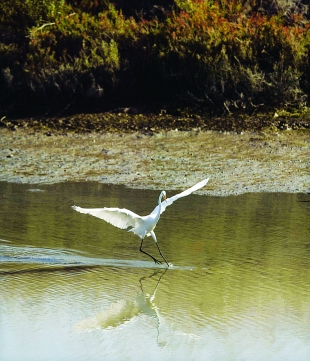 A snowy egret alights at a tidal basin at Bedwell Bayfront Park in Menlo Park. (File photo by Kainaz Amaria on November 22, 2005.)

Adding an off-leash dog park, a kayak launch and an area for people to fly aerial glider airplanes to Bedwell Bayfront Park in Menlo Park is opposed by most members of city's Parks & Recreation Commission.

Those are among proposed changes to the 160-acre park, located at Marsh Road and U.S. 101, that have been considered in a master plan being developed by consultants from Callander Associates.

The parks commission, in its recommendation to the City Council, voted 6-1 on Oct. 25 to oppose an off-leash dog park and a kayak launch. The commission voted 4-3 to oppose allowing glider airplanes in a designated area of the park.

The votes came two weeks after the commission held a study session on plans for the park.

The commission gave unanimous support to an outdoor classroom at the park and otherwise recommended the City Council approve the draft master plan.

That plan is expected to go the council on Nov. 14.

What is wrong with a kayak launch? Sounds like a great idea!

Like this comment
Posted by whatever
a resident of Menlo Park: Central Menlo Park
on Nov 4, 2017 at 5:52 pm

Just nature on top of a dump? Down wind from a treatment plant?

Do the most for the largest group in need - Menlo needs more fields!

Like this comment
Posted by MP Resident
a resident of Menlo Park: Downtown
on Nov 6, 2017 at 5:00 pm

I'm neutral on the dog park (too many dog owners are twits), but blocking a kayak launch? Really? Human powered boats are quiet, non-polluting, and an excellent way to explore the local shoreline.

Is the parks commission deathly afraid somebody, somewhere, might be having fun?

It's well known in the conservation community that Kirsten Keith is pushing the kayak launch. The parks and recreation commission took extensive feedback from residents and stakeholders and recommended against it.

A Pragmatic Approach to A Trillion Trees
By Sherry Listgarten | 4 comments | 4,053 views

Singapore's oldest cafe was about to open in Palo Alto. Then, the coronavirus hit.
By Elena Kadvany | 1 comment | 3,289 views

Repairing a Disagreement with your Beloved & “Physical” vs. “Social” Distancing
By Chandrama Anderson | 2 comments | 2,729 views

The University of California’s flexible policies during COVID-19
By John Raftrey and Lori McCormick | 6 comments | 2,665 views