How much should Atherton spend to protect trees? | News | Almanac Online |

How much should Atherton spend to protect trees? 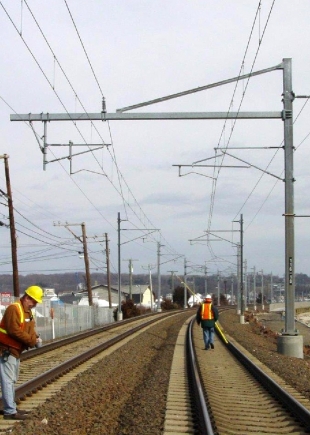 This is an example of a pole with a cantilevered, horizontal arm spanning two sets of tracks, to support the wires needed for Caltrain electrification. Caltrain says it chose the taller poles to reduce the removal and pruning of trees along the tracks. (Photos courtesy town of Atherton)

Why wouldn't the same rules apply to Heritage Trees for the proposed new Civic Center as apply to Atherton TAX PAYERS building on their lots? If the proposed property is too large for the lot, and trees need to be cut down, the answer is NO.

So let's change the title of this article to "How much should Atherton spend to protect its police department?" and get to the overblown cost of this Taj Mahal Civic Center. NO TREES TO BE CUT. No $55M of TAXPAYER money on the Civic Center. Respect the will of the voters on the parcel tax issue. Scale it down. WAY DOWN. Then no trees need to be cut, and no taxpayer money needs to be wasted, and maybe the police will not feel so protected that they feel they can railroad a complaint investigation and not need to interview cops who have had a formal complaint lodged against them for months.

Someone needs to speak up for the trees. And the tax payers. Cops, I'm not so worried about. That union is too big, too rich, too powerful and too strong, and it's bought too many Atherton council members.

Residential property owners are granted permission to remove heritage trees on their properties. That's a routine occurrence but only after they evaluate design options for saving as many as they can.

That's what is going on here. You are certainly entitled to your opinions, but at least, let's keep the facts straight.

Report Objectionable Content
Email Town Square Moderator
7 people like this
Posted by The Lorax
a resident of Atherton: other
on Dec 19, 2017 at 9:01 am

Thanks for explaining what's going on here. I was confused. I didn't realize that $55M was the cheapest option available to the tax payers for improving existing facilities. Thanks for clearing that up. It all make so much sense.

Report Objectionable Content
Email Town Square Moderator
5 people like this
Posted by Get on with it
a resident of Atherton: Lloyden Park
on Dec 19, 2017 at 9:52 am

Just build the civic center already. If trees have to come down, so be it. Offer up the wood as free firewood or build some benches out of it. Plant some new trees and get on with life. Let's now waste any more time with redesigning. Get on with construction already.

Report Objectionable Content
Email Town Square Moderator
7 people like this
Posted by The Lorax
a resident of Atherton: other
on Dec 19, 2017 at 9:56 am

Hey Get On with It, will the same rules viz a viz trees be used if I want to rebuild my home? Can I just knock them down and get on with it?

Report Objectionable Content
Email Town Square Moderator
9 people like this
Posted by Get on with it
a resident of Atherton: other
on Dec 19, 2017 at 11:00 am

I don't know what Atherton's current rule is, but yes. Remove what is dead/dying, relocate what you can, and take down what you can't. Replace the removed trees at 4X or 8X or whatever the ratio is, and pay for each heritage tree removed -- $20k or $50k or $100k, whatever. I think measures like these are pretty standard up and down the peninsula. At the end of the day, you build what you need to build, and you end up with as many or many more trees that when you started.