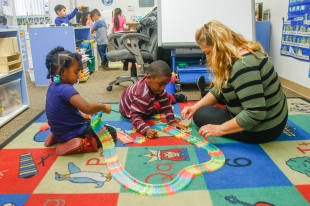 The Ravenswood City School District Board of Education took two steps toward maintaining fiscal solvency on Thursday night, approving layoff notices for 64 positions and a renewed parcel tax for the June ballot.

Both steps are part of the district's plan to address a $3.3 million shortfall next year, the result of declining enrollment and several years of deficit spending. The district faces shortfalls in the out years as well.

The board will issue notices to 39 classified staff, including a health and wellness coordinator, secretaries, custodians and school support staff, and 25 staff members at the Child Development Center, the district's state-subsidized preschool program. Sixteen instructional aides, eight permit teachers and a compliance analyst at the Child Development Center (CDC) will receive notices — the bulk of the staff who work there.

The board approved the notices in two separate 4-0 votes, with Trustee Marielena Gaona Mendoza abstaining each time. She said that the district did not make available in time documents she requested and needed to make a well-informed vote. Staff said that she had been provided with enrollment and salary information but not yet job descriptions she requested for every position in the school district.

The trustees also unanimously approved a resolution to renew a 2011 parcel tax that expires in June. The parcel tax provides $1.1 million that pays for 11 teaching positions. The measure's passage, which requires a two-third's vote, will be crucial to preventing further budget cuts.

The district plans to renew the tax at its existing rate — $196 per parcel — for eight years, subject to an annual inflation adjustment not to exceed 3 percent. A poll conducted by an outside firm for the district in January and February found support for the parcel tax: four in five voters polled supported the measure. Support diminished, however, as voters were provided more information about the tax, though not below the two-thirds threshold.

As the board cut most of the positions at the Child Development Center, the preschool's future continues to be uncertain as Ravenswood does not plan to close the center but will relinquish its 185 state preschool spaces on June 30, at which point the district hopes the San Mateo County Office of Education will have successfully negotiated with the California Department of Education to maintain the slots for Ravenswood students and families.

The county office is currently in talks with the state to take over the spaces. If so, the county would not operate the preschool center but find local providers to do so.

Parents, staff and community members have responded with concern to the change in operations at the preschool, including penning a parent petition, speaking at board meetings and organizing community meetings. East Palo Alto Mayor Ruben Abrica asked county Superintendent of Schools Anne Campbell to speak directly with community members about the CDC at a meeting on Wednesday, Feb. 28, at 6:30 p.m. at East Palo Alto City Hall, 2415 University Ave.

Abrica blasted district leadership last week for asking the City Council to make a "long-term financial investment" in the preschool center, a request he described as a "sneak ambush." He alleged that district leaders have created a "culture of corruption, intimidation and coverup."

Board members and the superintendent responded to his comments indirectly at Thursday's meeting. In a long statement during the superintendent's report, Superintendent Gloria Hernandez-Goff called for unity in the face of outside pressures, including increasing gentrification and division in the community. She became visibly emotional as she spoke, wiping away tears.

"As I look into the audience I want your faces and those of your children and grandchildren to still be a part of this community in 20 years," she said. "If we fight one another, that dream will be nothing more than a last thought as we are all replaced by multimillion dollar homes and larger tech campuses."

Board President Ana Pulido echoed: "Through division we won't conquer very much but through unity I think we can come to … a place of progress moving forward."

Ravenswood's finances continue to be under close watch by the San Mateo County Office of Education, which now has a standing agenda item at board meetings. Campbell, who attended Thursday's meeting, also asked an intervention specialist from the state's Fiscal Crisis & Management Team to make a presentation to the board on risks for and indicators of fiscal insolvency.

Super is corrupted is a registered user.


The superintended is corrupted and retaliates against employees or parents who speak up or complaint, but rewards those who speak on their behalf or who cover for her. She gives them teaching position when they do not have the appropriate credentials. You could see that yesterday when she retaliated against Mr. Prado who complained at the regular board meeting against Gloria because she decided to close his position of Credential Analyst. He has been working there for more than 30 years and the only reason he says he was put in the blacklist is that he spoke up when Gloria place his son in his tiny office, doing nothing but drinking coffee. Also during the elections, he, allowed to have a sign supporting Dr. Night for school board, and when Gloria found out he was scolded and yelled at. Two good motives to close his position. Who in the right mind closes this important position, and do not cut her own son's position who has only been working there for 3 years and makes almost as much as the Credential Analyst? This is corruption at its best. How can we get rid of her? The board members are blind (most of them), and they will do nothing because they will look bad themselves. Time for them to go to. They are going to pay the price when elections come and they want to run again for the seats.

Gloria and most of the board need to go. They are being corrupt.

The first few seconds after awakening; before I remember the virus
By Chandrama Anderson | 0 comments | 3,268 views

Can you stay healthy without making more trash?
By Sherry Listgarten | 6 comments | 2,650 views

Think about helping others in our coronavirus-affected area
By Diana Diamond | 6 comments | 2,479 views