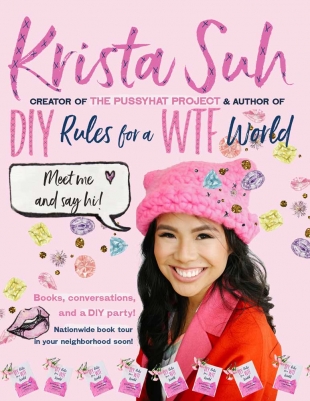 Crafter Krista Suh will be at Cafe Zoe in Menlo Park on Sunday. Image courtesy kristasuh.com.

Scientist Heidi Arjes of Menlo Park used to worry about other scientists learning that she loves to knit.

Ms. Arjes is a postdoctoral scientist who now works at Stanford, and as a graduate student, she viewed her knitting as a hobby. She didn't want other scientists to take her less seriously when they learned she designed knitting patterns.

But when she designed a knitted "resistor" hat last year that became to the Science March something like what the pink "pussyhat" was to the Women's March, she learned that her passion for science and her love of knitting were not mutually exclusive.

Ms. Arjes first started mixing science and knitting when she would design commemorative hats for her scientist friends who completed their doctorates.

"I feel that it humanizes science in a way," she said. "As scientists … it's a good idea to get out there and talk with people so people realize scientists are also really people rather than this idea of old people in lab coats doing crazy things."

On Sunday, Feb. 25, Ms. Arjes has organized an event at Cafe Zoe in Menlo Park to bring her knitting heroine, Los Angeles-based crafter Krista Suh, to talk about her experiences. Ms. Suh popularized the "pussyhat" prototype (a square pink knitted hat that became the unofficial symbol of the Women's March). She recently released a book, "DIY Rules for a WTF World."

"Even if you're not a crafter, I feel like in Silicon Valley, everyone can probably appreciate how amazing the marketing skills that went into making (the) event so successful," Ms. Arjes says.

She runs an informal knitting group of about 10 people; it generally meets at Cafe Zoe Thursday evenings and weekends, and accepts beginners. She says that in the past decade or so, there's been a resurgence in knitting and crocheting, noting that many people find the repetitive motion to be meditative and calming.

She is a proponent of what she calls "craftivism" – that's crafting and activism, where she says "you use your crafting to support a cause."

Her own website is craftimism.com, or crafting plus optimism.

She also contributes crafts to wedonotagree.org, a website several locals put together in which handmade crafts are sold online and the proceeds donated to the buyer's charity of choice among several organizations: the American Civil Liberties Union, Natural Resources Defense Council, Planned Parenthood or the Southern Poverty Law Center. The group has so far raised about $6,300.

Krista Suh will be at Cafe Zoe, 1929 Menalto Ave., on Sunday, Feb. 25, at noon to answer questions and sign copies of her book, "DIY Rules for a WTF World."

The first few seconds after awakening; before I remember the virus
By Chandrama Anderson | 0 comments | 2,773 views

Can you stay healthy without making more trash?
By Sherry Listgarten | 2 comments | 2,046 views

Think about helping others in our coronavirus-affected area
By Diana Diamond | 4 comments | 1,964 views