Studies for Menlo Park school district would cost over $43,000 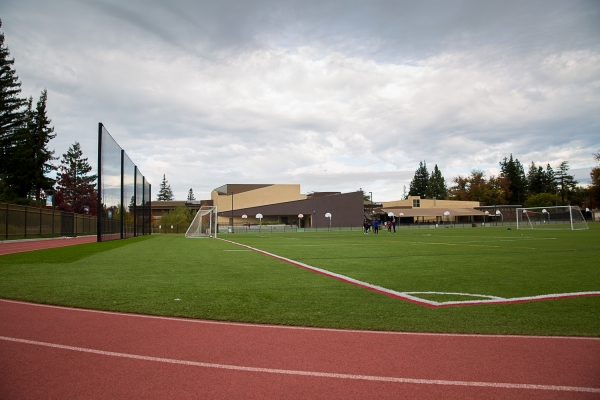 Parents have asked for additional studies on the potential dangers of the ground-up tires used as infill at this artificial turf field at Hillview Middle School in Menlo Park, as well as one at Kelly Park. (Photo by Michelle Le/The Almanac)

After the Menlo Park City School District board in November received the results of a study that said the artificial turf fields at Hillview Middle School and Kelly Park pose an insignificant risk of cancer, parents asked for more study of the safety of ground-up recycled tires used as infill in the fields.

A consultant has returned to the district with a proposal for those further studies, including looking for substances the first study did not examine, and testing the air on the fields to see if inhaling it could cause a health hazard.

The Menlo Park district's governing board will meet Tuesday, March 13, to decide if it will approve the additional tests. The meeting starts at 6 p.m. in the district's TERC building, 181 Encinal Ave. in Atherton.

At the November meeting a consultant told the board that it would cost between $250,000 and $375,000 to replace the ground-up tires, known as crumb rubber, with another substance on the Hillview field. Completely replacing the field would cost $750,000 to $850,000. The field is expected to last another eight years before it would need replacing.

The school district also checked with other schools to see what they have done with their playing fields.

The school district is part of a statewide study of the potential dangers of artificial turf fields; the results of that study are not expected to be available until 2019.

Or show your support for local journalism by subscribing.

As much as, of course, I care about the health and safety of our kids, spending more money on this is not just appropriate for the district. We have so many more pressing budget issues. If the study were to show it needs replacement sooner than the 8 years, the district isn't in a position to spend nearly a million dollars more on a new field. Where would that money possibly come from, not to mention the ill will it could seed in the community after we recently got Measure X passed.


I think the cost of another study should be paid for my those asking for it, not the district. Enough is enough. Put your money where your mouth is.

Report Objectionable Content
Email Town Square Moderator
6 people like this
Posted by Menlo Voter.
a resident of Menlo Park: other
on Mar 12, 2018 at 5:51 pm


I'm with Steve J, To those whiny parents that are worried about their children; pay for the testing yourself. If it's found to be a problem then the board should pay for the cost of testing. Otherwise, if it's that important to you, put your money where your mouth is. Or, if you don't want to pay for it and are truly that concerned, DON'T LET YOUR CHILDREN PLAY ON THE FIELDS YOUR CONCERNED ABOUT! The rest of us aren't concerned and are tired of dealing with whiners.

Report Objectionable Content
Email Town Square Moderator
8 people like this
Posted by MA
a resident of Menlo-Atherton High School
on Mar 12, 2018 at 8:51 pm

Been working out on a turf field for 18 years. What a joke.

Much safer and a *lot* less injuries than grass.

Report Objectionable Content
Email Town Square Moderator
5 people like this
Posted by JL
a resident of Atherton: West of Alameda
on Mar 12, 2018 at 10:00 pm

What a waste of money. There are thousands of these fields all over. The EPA is already looking into it.

Report Objectionable Content
Email Town Square Moderator
3 people like this
Posted by Peter Carpenter
a resident of Atherton: Lindenwood
on Mar 13, 2018 at 10:50 am


"Concerns have been raised by the public about the safety of recycled rubber tire crumb used in synthetic turf fields and playgrounds in the United States. We know people are concerned and players and their families want answers. Limited studies have not shown an elevated health risk from playing on fields with tire crumb, but the existing studies do not comprehensively evaluate the concerns about health risks from exposure to tire crumb. We are committed to supporting more comprehensive efforts to assess risks from tire crumb.

Report Objectionable Content
Email Town Square Moderator
6 people like this
Posted by maximusgolden
a resident of Atherton: Lindenwood
on Mar 13, 2018 at 12:37 pm

The State of Washington looked at this issue and found:

“As a result of our investigation, we found that the number of players … was less than expected, given rates of cancer given Washington residents of similar ages,” said Dr. Cathy Wasserman, state epidemiologist for noninfectious conditions.

This article Web Link does offer some simple steps that players can take to reduce exposure:

• Wash hands after playing on the field and before eating.

• Take off cleats, sports equipment and soiled uniforms outside or in the garage to prevent tracking crumb rubber in the house.

• Shower after play and quickly clean any cuts or scrapes to help prevent infection.

• Athletes who accidentally get crumb rubber in their mouths should not swallow it.

Given that this issue is not unique to these fields and has been throughly investigated, I agree that the parents should pay for additional studies if they feel them necessary

I cannot believe the District is taking this seriously. Oh, Oh, I have an idea. How about we spend a few hundred thousand on the following:

- health effects for riding in a diesel powered school bus
- impacts for sitting too close to a dry erase markers
- risks for contracting rare diseases from working in the school garden
- study for eliminating grapes on campus -- choking hazard.

These local restaurants are donating meals to Bay Area residents in need. Here's how to help.
By Elena Kadvany | 6 comments | 10,830 views

Coronavirus: Plan ahead now for a big outbreak
By Diana Diamond | 18 comments | 3,908 views

Will the Coronavirus Save Lives?
By Sherry Listgarten | 29 comments | 3,733 views

The first few seconds after awakening; before I remember the virus
By Chandrama Anderson | 0 comments | 798 views