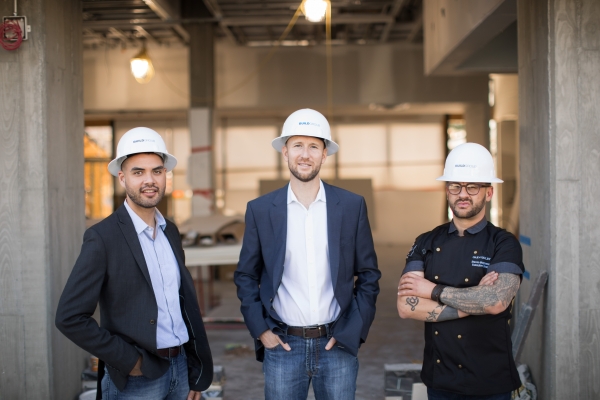 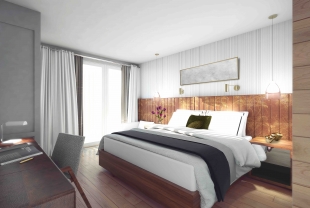 A rendering of a planned guest room at the Park James Hotel, set to open in July. (Image courtesy Pollock Financial Group/Broughton Hospitality.)

A new 61-room boutique hotel being built at the corner of Glenwood Avenue and El Camino Real in Menlo Park, to be called the Park James Hotel, is being prepared to open in July.

Along with the hotel, a new restaurant, called Oak and Violet, will open to the public, said developer Jeff Pollock of Portola Valley-based Pollock Financial Group.

"Even though this is lodging for anyone all over the world, it's going to have a very local flavor," Pollock said. That local flavor is rooted in the names of both the hotel and its restaurant, he explained.

The "James," Pollock said, is intended as a nod to the city's Irish history, after Dennis "James" Oliver, one of the ranchers who gave Menlo Park its name. The name doubles as an homage to his father, James Moore Pollock, who has developed over 80 real estate projects since the 1960s, mainly in the Bay Area, he said.

Oak and Violet draws its name from the designated city tree and city flower. The restaurant is expected to offer "California"-style cuisine, with locally sourced and organically grown fresh food and craft cocktails.

According to General Manager Weston Spiegl, dinner entrees are expected to run $20 to $50. All meals will be offered, and the restaurant is intended to be "approachable, (and )fitting for the local demographic," Speigl said.

The hotel will be operated by Broughton Hospitality and managed by Spiegl, former director of operations at restaurants housed in the Staples Center in Los Angeles. Hotel rooms are estimated to cost in the "mid-$400 range" per night, depending on the market, Pollock said.

A soft opening is planned in early July, with a grand opening slated for later that month.

5 people like this
Posted by Center Menlo Park Resident
a resident of Menlo Park: Central Menlo Park
on May 13, 2018 at 12:38 pm

Personally wishing Pollock that this project turns into bankruptcy.

Built on a postage stamp sized lot, sure to cause even more traffic problems when opened, and has caused safety and massive traffic jams while being constructed, this project represents what the present council will approve because of the allure revenue from the Hotel Tax.


This is a prime example of the present council members , all of whom should not be re-elected and should instead be recalled, completely ignoring what should be their prime mission, which is to at least keep the quality of life in the city.

Wake up residents. Remove this council and the city manager

The ugly polluting traffic causing gas station that occupied the lot previously was way better than an attractive hotel and restaurant. Shame on the city council for trying to upscale ECR with a much need hotel.

So tired of the "I Got Mine" club arguing that the ugly expanses of ERC (run down buildings, abandoned lots, etc...) should be status quo in the village of MP. They've benefited from affordable housing, low property taxes and high appreciation. Now they don't want the consequences of their actions (more traffic, higher prices, development) nor do they care if younger generations can affordably live here (they can't).

It really is shameful.

Report Objectionable Content
Email Town Square Moderator
14 people like this
Posted by really?
a resident of Menlo Park: other
on May 15, 2018 at 10:16 am

Who are these comments from!?!? That hotel already looks miles better than most of the junk along ECR and will be a huge asset to Menlo Park. Good luck to Pollack and the hotel when it opens.

Report Objectionable Content
Email Town Square Moderator
9 people like this
Posted by Sara Shaw
a resident of Menlo Park: University Heights
on May 15, 2018 at 11:17 am

So excited to have this beautiful hotel opening soon-What a great
addition to Menlo Park! Wishing great success
to Park James and the Pollacks.

A Pragmatic Approach to A Trillion Trees
By Sherry Listgarten | 2 comments | 3,628 views

The University of California’s flexible policies during COVID-19
By John Raftrey and Lori McCormick | 6 comments | 2,463 views

Repairing a Disagreement with your Beloved & “Physical” vs. “Social” Distancing
By Chandrama Anderson | 1 comment | 2,368 views