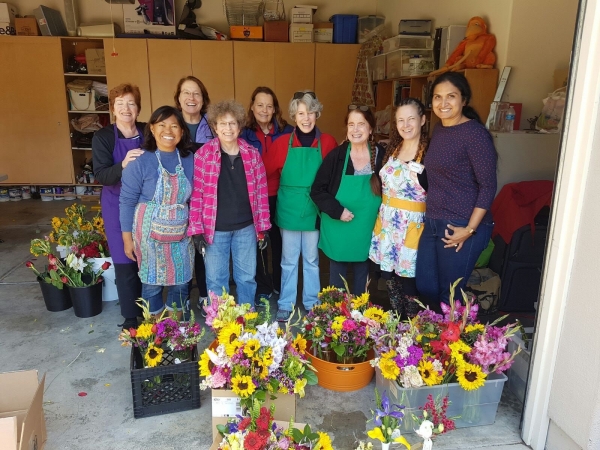 The "Blossom Buddies" are continuing to spread cheer with flowers in the community after the closure of Random Acts of Flowers. (Photo courtesy Sheela Veerina.)

In the wake of the closure of Random Acts of Flowers, a new group called Blossom Buddies has sprouted up with a similar purpose: to deliver flowers locally to the ailing and elderly.

Random Acts of Flowers, a nonprofit that collects flowers that are past their sell-by date and headed for the compost heap, relies on volunteers to rearrange them artfully, and delivers the arrangements to local health and senior care centers. The national organization shuttered its Menlo Park branch at the end of March when costly rent made continued operations at its Edison Way site untenable.

Blossom Buddies was started by Sheela Veerina of Los Altos Hills, formerly an active volunteer with Random Acts of Flowers. She runs the flower-arranging workshop out of her garage.

"I was hoping somebody else would start it, but nobody else did. So I had to," she says.

With a group of volunteers, many recruited from Random Acts of Flowers, Veerina has relaunched the initiative, partnering with some of the same vendors who previously donated their blooms.

Blossom Buddies is not yet a formally recognized nonprofit. (There's a lot of paperwork involved, she notes.)

Veerina said she got involved as a volunteer at Random Acts of Flowers in 2015 and found the volunteer work to be a meaningful way to connect with veterans and do something to boost people's mental health.

She said recipients like veterans are often surprised to be presented with bouquets, and men one wouldn't expect to care about flowers at all even fight over which bouquet they get.

"It's very sweet," she said. "When we went back to the Palo Alto VA, they were so excited, and so happy to see us again."

Plus, in the time the volunteers spend arranging the flowers, many develop friendships and camaraderie.

Veerina says she is accepting vase donations. People who want to get involved or help out can email her at blossombuddies7@gmail.com.

The first few seconds after awakening; before I remember the virus
By Chandrama Anderson | 0 comments | 2,390 views

Can you Stay Healthy without Making More Trash?
By Sherry Listgarten | 2 comments | 1,688 views

Think about helping others in our coronavirus-affected area
By Diana Diamond | 2 comments | 1,543 views