By invitation only | News | Almanac Online |

How some local wineries celebrate the harvest 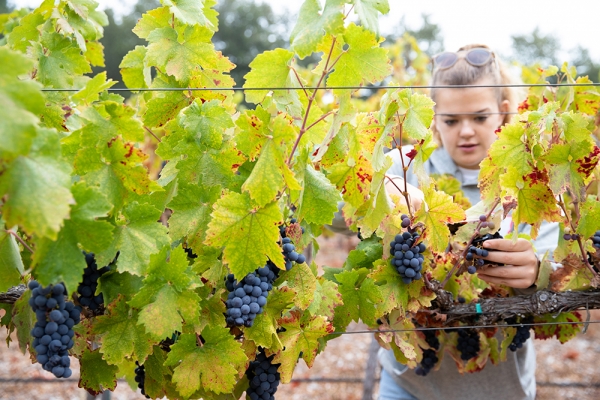 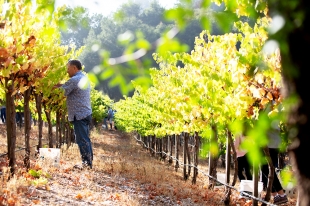 Special to The Almanac

Want to get involved in the local wine scene? Then join the club.

Of the dozens of acres of vineyards found in Portola Valley and Woodside, most are completely private, with owners using a third party to gather grapes and bottle the wine for their own use. But a few full-fledged wineries are open to the public during the harvest season, as long as you belong to their wine clubs.

In mid-September Hector Ribera continued his family tradition of the past four years, driving down the hill to help pick and crush grapes at his neighbor's winery, Portola Vineyards, located at 850 Los Trancos Road in Portola Valley.

About 30 wine club members spent a weekend day working in rows, snipping off clumps of pinot noir grapes with special scissors, and putting them in baskets for crushing. Only a small portion of the grapes were stomped by young feet.

In 2003, Len Lehmann planted 2 acres of vines on his property with the intention of selling the fruit to local wineries. But with time he shifted gears. His wife bought him a small press and destemmer to process grapes, and he "was mentored by several fine winemakers in this region," he says. In 2007, he went commercial.

Now the winemaker not only grows grapes, but also buys them from Cooper Garrod in Saratoga and two vineyards near Watsonville. He produces about 1,000 cases of six varieties of wines each year.

He calls Portola Vineyards "a community-supported winery" because he has 260 club member households that are signed up to receive wine at a discount. They're also invited to events at the winery.

"There's a long history of winemaking and grape growing; there were 800 acres planted in Woodside and Portola Valley before Prohibition," he says.

"We're trying to engage the residents in that heritage," Lehmann adds. "It's sad that history has been forgotten. We make beautiful wines here, some of the finest wines in the world."

Demand for fine wine has led to growth at Craig and Margaret London's Woodside Farm Vineyard at 1 Vintage Court in Woodside, where La Questa Winery originated in the 1800s.

The couple left Atherton, looking to switch things up when their children moved out of the house. After consulting experts from University of California at Davis and California State University, Fresno, the Londons planted vines on 2 sloping acres in 2004.

When the grapes matured, friends helped out with the harvest, bottles were given away, and half of the wine went to charity. That sequence of events proved to be a winning formula, and an annual tradition was born. But people liked the wine so much, the hobby evolved into a licensed and bonded commercial business, with winemaker Joel Burt brought in from Sonoma to oversee production.

When about 100 wine club members showed up this year for the annual picking and crush brunch on Sept. 22, a crew of workers came in from the Central Valley to help out.

With a background in chemistry, Margaret London is usually preoccupied with testing sugar and sulfite levels, but on this day she was busy hugging and thanking all the regulars who showed up to fill buckets with merlot and zinfandel grapes.

Daughter Annie Tcherepnin looked relieved to see so many reinforcements. She recently moved her family to Woodside and has found herself spending a lot of time lately picking chardonnay and zinfandel grapes alongside her parents. But she's not complaining. "It's a labor of love," she insists.

Craig London is CEO of eCullet, a glass processing company. His son, Adam London, is working alongside family friend George Cavender of Atherton at the destemmer on harvest day. Cavender also assumes the role of chief corker later on in the process.

The destemming, pressing, fermenting in tanks and barrels, and bottling take place in the same building. Production ranges between 250 and 300 cases of wine a year.

The Wine Club Harvest Picnic at Spring Ridge Vineyard (555 Portola Road in Portola Valley) on Oct. 6 involved several generations of the Neely family who live on the 229-acre swath that extends nearly to Windy Hill.

Kirk Neely is a pediatric endocrinologist at Stanford University, and when he and his wife, Holly Myer, moved to the property in 1995, there were about 9 acres planted with grapes. Since then they've added 7 acres of pinot noir vines.

Their daughter, Lucy Neely, the winery's director of sales and marketing, explains how they were drawn into the business: "The main motivation for my parents was a love of open spaces, land and wine, and if you're going to be stewarding a large piece of land it's important to have the land support itself."

During a drought, she says, annual production of Neely wine can drop by almost half – from 2,000 cases to just over 1,000.

Her brother, Simon Neely, is vineyard manager; her wife, Devon Quirk, runs the wine club. Holly Myer is involved in harvest activities, and during the recent September harvest, she manned the sorting table.

Winemaker Shalini Sekhar is now focused on the post-harvest process.

While 2018 vintage wines are now being crafted, some celebrations are still scheduled, such as the release party for wine club members on Sunday, Oct. 28, from noon to 3 p.m. at Kings Mountain Vineyards, located at 187 Kings Mountain Road in Woodside. Members will pick up their bottles and taste the 2014 pinot noir, as well as some "library wine," says Kristi Bowers, director of sales and marketing and daughter of winery owner Mike Markkula.

A little more than 1 acre was planted with chardonnay, pinot noir and cabernet sauvignon grapes at the Markkula estate in 1992, and then the vines were grafted in 2008 with pinot noir grapes.

They use a four-branch formation, or "quads," rather than "bilateral" or two-branched vines, increasing the yield to anywhere between 5 and 7 tons of grapes per acre. The winery makes close to 400 cases a year.

All wine clubs work a little differently, offering buyers who commit to purchasing a certain number of bottles a membership discount. Depending on the winery, they may also sell to retail stores, restaurants, and out of state.

The first few seconds after awakening; before I remember the virus
By Chandrama Anderson | 0 comments | 2,416 views

Can you Stay Healthy without Making More Trash?
By Sherry Listgarten | 2 comments | 1,703 views

Think about helping others in our coronavirus-affected area
By Diana Diamond | 3 comments | 1,619 views