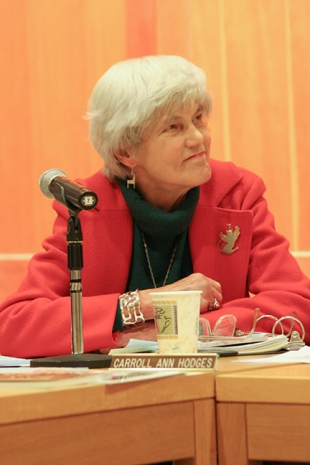 Carroll Ann Hodges at the Woodside Town Council dais in 2009.

A lovely article, Maggie. I know you and Tom were very close friends of hers, and I offer my sincere condolences. Carroll Ann was a mentor and a friend to me from my early days on the Open Space Committee, and her perspective was clear and true, Her passing is a great loss to our town.

Anne Le Ziblatt, formerly of Tamarine and Bong Su, is back with a Vietnamese noodle bar in Redwood City
By Elena Kadvany | 7 comments | 3,569 views

You Can Help: Scents and Migraines
By Chandrama Anderson | 0 comments | 850 views