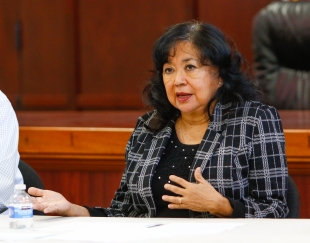 Three weeks after placing the Ravenswood City School District's controversial superintendent on paid administrative leave, the Board of Education quietly — and unanimously — accepted her resignation in a special closed-session meeting on Tuesday night.

Board President Tamara Sobomehin confirmed Wednesday that the board approved a separation agreement with Superintendent Gloria Hernandez-Goff. Her employment will be terminated effective March 31. The district did not immediately make the separation agreement available.

District staff were notified via email on Tuesday night.

Hired in 2013, Hernandez-Goff will be leaving before the end of her current two-year contract, which the board renewed amidst community protest last April. She could not be immediately reached for comment.

Hernandez-Goff was a divisive figure in the K-8 district, with strong allies who defended her efforts to turn around the district and fervent critics who accused her of financial mismanagement, nepotism and retaliation.

The board's decision to place her on paid leave reflected that division. The board's newest trustees, Sobomehin and Vice President Stephanie Fitch, along with Marielena Gaona-Mendoza, voted in support, while Ana Pulido and Sharifa Wilson cast the "no" votes.

Under her contract, Hernandez-Goff and the district could terminate the employment agreement by written mutual consent.

Alternatively, the board could terminate her for cause, defined in the contract as failure to perform her duties as superintendent or legal violations. Without cause, the board is contractually required to provide her with 120 days' notice and pay her severance, which would be regular salary Hernandez-Goff would have earned until terminated. Her base salary is $192,814.

Sobomehin declined to answer any further questions about the nature of the settlement agreement.

Gina Sudaria, the district's director of student services and a longtime employee, has been serving as acting superintendent in Hernandez-Goff's absence.

Brian is a registered user.


This is a step in the right direction, provided they did not need to pay her a severance. They need to fire her son as well and remove all the "cronies" that she hired and that have done an abysmal job. Now hopefully they can focus on delivering a decent education the the students in the district. The need to set the goal of boosting the rating of the schools and the test scores of the students every year until they are rated at least a 7 (of course an 8, 9 or 10 would be preferable). Start by giving teachers the resources they need and the pay they deserve.

3 people like this
Posted by Yes, Corrupted Employees Out Now!
a resident of Belle Haven Elementary
on Mar 21, 2019 at 7:36 pm

What about Lorena? When is she going to get fired, There was a Belle Haven parent at a board meeting who spoke about Lorena putting her child at risk, when she made him leave the plaza that is outside Belle Haven because she claimed that it was private property (This happens at Sears long time ago, the child was abducted and kill his name Adams). The district is lucky that nothing happened to this minor child otherwise there would be a big suit against the district. Can Lorena show the documents that say that that part in fact belong to the school district, or that it was part of Belle Haven. That day the police was called and they came and told the district administrators that it was public property.
How can day continue to have her working at the district with big salary when she puts children at risk and almost give the parent heart attack when she did not could not find him? I hope that the board members do something about her too. I am sure that there are a lot more complains about her, but only this case has become public, thanks to the courageous mother.
What about Lucy Barron who did not hesitate to lie to make Gloria look good, and even went to a meeting and attaccked one of the good board members? Furthermore she pretended lied to the TV reporters when she said pretended to be a poor parent who would benefit from using the laundry machines. Here is the link to the story. This woman should not be allowed to be at the district. Gloria gave her three years retribution for doing that ask HR if you do no believe it. Here is the link to the news:
Web Link
I hate people who lie or pretend to be someone else rs and believe that they are not good models for our children. These lady works at the district and I imagine that she makes a lot more money than the paras and custodians only because she coperated with the super's corruption.
What about Denos (her son) with all the criminal records and he is still an employee of the district? This has been brought to the attention of the board members so many times, but nothing has been done. He harrased or harrases other employees and was not afraid because his mama was the super. I could understand why the former board members did nothing about it, because they were as corrupted as the super, but the new board members, I was expecting better from them. I just hope they do not get contaminated with corruption too because if this happens, then we will be back to 0, and our parents will continue to pull their kids out of Ravenswood in hopes to find something better like KIPP, Palo Alto, Menlo Park, Las Lomitas, San Carlos, etc. And the ones who can afford it will take them to private as long as things remained the same.
New Board Members, please, please do not fall into Pulido and Wilson's corruption, do not allowed them to drag you. My family and I voted for you because we believed that you will make a difference and will clean house. Now please show us that we did not make a mistake but doing the right thing and getting our the rest of corrupted people that Gloria brought from Sacramento, or who were already working at the district and was able to contaminate them.

Repairing a Disagreement with your Beloved & “Physical” vs. “Social” Distancing
By Chandrama Anderson | 1 comment | 2,390 views