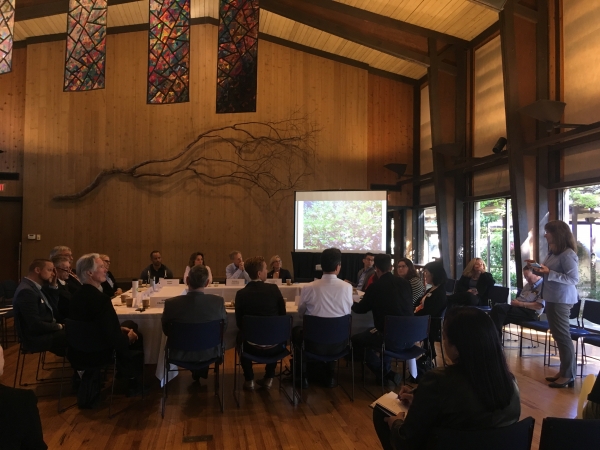 Leaders across the Midpeninsula convened April 18 to discuss the possibility of a transportation management association that would operate from Redwood City to Sunnyvale. The discussion was convened by Joint Venture Silicon Valley. Menlo Park City Manager Starla Jerome-Robinson speaks to the group, far right. (Photo by Kate Bradshaw/The Almanac.)

In view of a hulking manzanita tree branch hung from the wall at the Unitarian Universalist Church in south Palo Alto, mayors and other elected officials from Redwood City to Sunnyvale met with transportation program leaders from the area's biggest employers on Thursday, April 18.

They were there to launch the "Manzanita Talks," a series of discussions convened by Joint Venture Silicon Valley to review ways to reduce solo driving on the Midpeninsula, potentially by starting what's being called a "sub-regional transportation management association."

A transportation management association (TMA) is a nonprofit that "develops, manages and markets a transportation program," according to the Palo Alto TMA website. These programs generally aim to give commuters viable alternatives to driving solo to get to work, and in some cases they can subsidize the cost of transit passes for low-income workers. TMAs generally include cities and/or businesses.

While the first meeting was focused on preliminary introductions, the group has an ambitious agenda: to potentially develop a conceptual plan for a sub-regional TMA by October. The group has planned four more sessions, set for May 16, June 13, Sept. 12 and Oct. 17. Redwood City, Atherton, Menlo Park, East Palo Alto, Palo Alto, Mountain View, Los Altos and Sunnyvale have been invited to participate in discussions about a possible TMA.

In addition, Elizabeth Lewis of the Atherton City Council, Diana Reddy from the Redwood City Council, and Glenn Hendricks of the Sunnyvale City Council were in attendance, along with other local stakeholders and transportation experts.

Joint Venture Silicon Valley president and CEO Russell Hancock, who moderated the discussion, explained that for better or worse, Silicon Valley is a center for innovation and continues to create jobs. There were 79,000 new jobs generated in Silicon Valley last year, and the region is in its eighth year of continuous economic expansion.

And yet, he added, the region is "surrounded on three sides by water and ringed by permanently protected open space. It's no surprise we're placing tremendous pressure on infrastructure."

Aaron Aknin, principal and co-owner at Good City Company, as well as a former assistant city manager and community development director in Redwood City, presented traffic data about several intersections around the region, saying that traffic is indeed worse than it has been in the past. Traffic on the Dumbarton Bridge, he said, is up 70% from 2011, indicating that people are traveling longer distances to get to employment centers. Transit systems are also nearing capacity, especially Caltrain, he added.

Hancock explained that one of the challenges to effectively deter solo driving is what's called the "first and last mile" problem. If people are going to use public transit, they have to also have reliable, convenient ways to traverse the segments of their journeys getting from home and work to transit stations, he argued.

Former Palo Alto mayor Nancy Shepherd explained that the region was developed first as a residential community before decisions over decades were made to draw so many jobs to the area. In a guest opinion piece published last month in the Palo Alto Weekly, she explained that some of the strategies TMAs can use to address the first- and last-mile problem are "transit subsidies, commute routes, incentives and more to reduce solo-occupancy trips into job center areas."

Palo Alto and Mountain View currently have TMAs, while Menlo Park and Redwood City have policies that support them. A number of tech companies in the area run their own programs to give commuters alternatives to driving.

Some city leaders in attendance raised concerns with the process, and with the concept of grouping so many different cities together. Mueller said he felt that Menlo Park's engineering professionals and transportation management staff would need to be included for the program to earn approval in his city.

Atherton Councilwoman Lewis pointed out that her town doesn't have any businesses, but does experience cut-through traffic it's interested in addressing.

Brendon Harrington, who manages transportation at Google, asked for case studies of TMAs in other areas that the group could learn from. TMAs that do well, he added, have well-defined problems and clear standard measures for success.

Shepherd explained that at the next session, the group will be taking a field trip to observe a successful transportation management association in Contra Costa County that has been in operation since the 1980s.

According to the schedule presented, after the June discussion -- which is also expected to delve into the major question of how such efforts would be funded -- Aknin of Good City Company will be tasked with developing a conceptual plan that will be brought forward in September and potentially approved in October. At that point, participating mayors and council members would need to get formal approval from the councils in their respective jurisdictions.

Gwen Litvak, senior vice president of public policy at the Bay Area Council, explained how transportation leaders from many of the region's big employers became involved in this initiative.

The Bay Area Council includes representatives from the Bay's largest employers and polls its member companies routinely. Unsurprisingly, she said, traffic and housing came up as two of the most predominant concerns.

"Folks are very invested in getting cars off the road," Litvak said, adding that companies want to be "part of the solution."

Once a TMA is established, she added, anyone, including smaller employers, can join – and in fact, TMAs work best when multiple businesses take part, she said.

She said the Bay Area Council is supportive of these efforts and is planning to develop a separate report to explore revenue models and different transportation management tools. The Bay Area Council is interested in exploring TMAs in other sub-regions as well, but this is the first time the council is providing support to form a TMA, she added.

On April 19, the city of Menlo Park also released a separate request for proposals, searching for a consultant to evaluate the commute patterns of people who work in Menlo Park, and make recommendations on four alternatives: creating a sub-regional TMA, a TMA with either large or small employers or organizations, or a citywide TMA.

The consultant would also be expected to do a cost-benefit analysis and look at the long-term impacts of a TMA. Proposals are due Friday, May 17, at 5 p.m.

According to Transportation Demand Management Coordinator Nicholas Yee, a separate Menlo Park process could create the potential to set up partnerships with East Bay cities. Creating its own TMA doesn't preclude Menlo Park from participating in a TMA that might come out of the Manzanita Talks, he added.

Dagwood is a registered user.


TMA is more tinkering at the margin. Freeing up roadway capacity during commute hours is an essential step, accompanied by more, more and more prioritized shared transit.

Glad people are thinking about how a TMA can free up road capacity so city efforts aren’t tinkering at the margins.

Editor: why were Portola Valley and Woodside not included??

A Pragmatic Approach to A Trillion Trees
By Sherry Listgarten | 4 comments | 4,083 views

Singapore's oldest cafe was about to open in Palo Alto. Then, the coronavirus hit.
By Elena Kadvany | 2 comments | 3,562 views

Repairing a Disagreement with your Beloved & “Physical” vs. “Social” Distancing
By Chandrama Anderson | 2 comments | 2,747 views