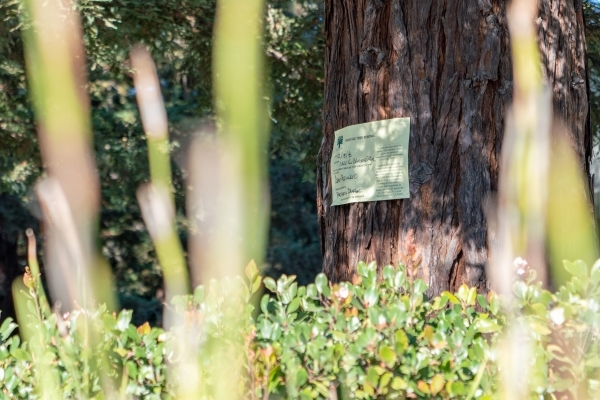 Seven trees on top of an underground garage at 1000 El Camino Real were slated for removal, but public outcry led to an appeal by residents, slated to be heard by the Menlo Park City Council tonight. (Photo by Adam Pardee.)

"Some of the steel cable tendons in the foundation of the parking structure have failed." How is removing the trees going to fix that problem? I understand that removing the trees should keep it from getting worse, but how will the steel tendons be repaired or replaced? Very sad, and scary.

From the Mercury News:
"The building needs structural repairs because steel tendons in the ceiling of its underground parking garage have broken due to water damage and erosion, according to a city staff report.

Completing the repairs would require severing the roots of the redwood trees to an extent that would decrease their stability, making them prone to toppling, the report states."

It is interesting to see the difference in priorities between the last city council and this one. The previous council voted to not let a family remove a redwood tree that was deemed by 3 different arborists (not the city arborist) as a danger and having the potential to fail and damage houses and/or cause injury. Instead they said the family would need to "mitigate" the risk as a large personal cost to them.

In this case I am not sure what the right answer is, they are not a native species to this area nor are they particularly old. I think requiring the owner to plant additional trees around Menlo is a good compromise.