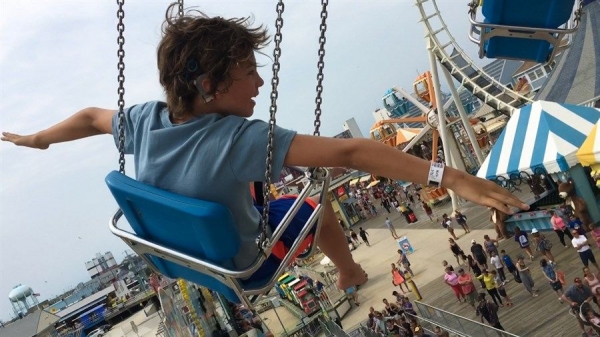 Terri Bullock of Atherton, the director of the program since its beginning, says Windrider searches out winners from film festivals around the country, then chooses from among those whose stories are told through "the lens of hope."

On Friday, June 28, three short films will be shown. "Esta es tu Cuba" follows a family during the rise of communism in Cuba in the 1960s. Director Brian Robau will be on hand to talk to the audience.

Cy Dodson, the director and editor of the short film "Beneath the Ink," will also attend the showing to discuss his subject – a tattoo artist in Ohio who for free offers to turn hate symbols such as a swastika or Ku Klux Klan figure into beautiful tattoos.

The third film being shown on June 28 won the 2019 Academy Award for Best Documentary Short Subject. "Period. End of Sentence" profiles the cultural changes spurred by an American high school student project that brought sanitary napkin manufacturing to an Indian community. Project participant/executive director Ruby Schiff will be there to discuss details.

The forum's final night, Saturday, June 29, will showcase director/producer Irene Taylor Brodsky and her film "Moonlight Sonata: Deafness in Three Movements." In it she shares the personal story of her son and parents dealing with their own deafness in different ways.

Beethoven wrote "Moonlight Sonata" when he was losing his hearing, and when Brodsky's son got cochlear implants, he sought to master the piece.

Both mother and son will be fielding questions after the showing.

Tickets are for sale online at windriderbayarea.org. They are $10 for students and $15 for adults. Depending on availability, tickets may also be available at the door.

The screenings start at 7 p.m. each evening.

The performing arts center is at 555 Middlefield Road.

A Pragmatic Approach to A Trillion Trees
By Sherry Listgarten | 4 comments | 4,064 views

Singapore's oldest cafe was about to open in Palo Alto. Then, the coronavirus hit.
By Elena Kadvany | 1 comment | 3,343 views

Repairing a Disagreement with your Beloved & “Physical” vs. “Social” Distancing
By Chandrama Anderson | 2 comments | 2,741 views

The University of California’s flexible policies during COVID-19
By John Raftrey and Lori McCormick | 6 comments | 2,672 views