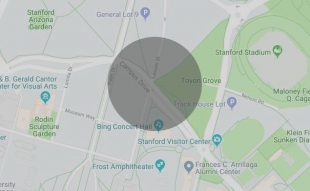 A man who was targeted in an attempted armed robbery on Lasuen Street near Campus Drive alerted authorities through a blue 911 emergency tower on July 16. Image courtesy Google Maps.

Three teenagers accused of punching and attempting to rob a man at Stanford University on Monday evening were arrested by police near Palo Alto High School, but a fourth boy remains on the loose, according to the university's Department of Public Safety.

The man was walking on Lasuen Street near Campus Drive, in the area of Bing Concert Hall, around 6 p.m. when he was approached by the four teenage boys, one of whom reportedly punched his face and tried to take his belongings, according to a public safety alert issued Monday night.

Another boy took out a firearm that he aimed at another man who was walking in the area and possibly interrupted the robbery, according to the alert. The man who was punched then notified authorities through a blue 911 emergency tower and the group of teens left the area on bicycles. The alert didn't indicate if the man needed medical treatment as a result of the punch.

Public safety deputies and Palo Alto police officers set up a perimeter in the area where they located thee of the four boys, all 15-year-olds, but were unable to find the fourth, the alert said. The outstanding suspect is described as about 15 years old and wearing a black hoodie; he was last seen near Palo Alto High. Authorities also found a replica firearm in the area, but didn't say whether it was the same weapon used during the attempted robbery.

In light of the attempted robbery, the department advises the public to be aware of their surroundings; walk or run with a companion; report suspicious activity or behavior by calling 911; avoid distractions such as using a cellphone while on foot; and travel on lighted or paved paths with blue 911 emergency telephone towers.

Anyone with information about Monday's attempted robbery is asked to call the Department of Public Safety at 650-329-2413.

Like this comment
Posted by Concerned
a resident of Menlo Park: Allied Arts/Stanford Park
on Jul 22, 2019 at 8:11 am

This was essentially a false police report. The 'victim' contradicted himself in the statement he made to the police. No gun was ever found, other than perhaps a toy gun (this is not definitive in the police report). The 'armed robbery" charges were dropped against all of the accused teen boys.

Please add to this article that the arresting officers failed to notify the parents of the children arrested of the fact that they were in custody. It was left to the parents to call multiple police departments looking for their children.

Please also add that the arresting officers hit and/or kicked the teens who were arrested, even though, to my knowledge, they were not resisting arrest.

I'm glad these violent kids were caught.
I hope they learn a lesson instead of listening to people trying to paint them as the victims somehow.
This will be the last step before prison, boys. Time to grow up and quit trying to steel the things other people work hard for.
Time to make the right choices in your lives. Right now, by robbing people in our society, you're only worthy of a jail cell.

The first few seconds after awakening; before I remember the virus
By Chandrama Anderson | 0 comments | 2,374 views

Can you Stay Healthy without Making More Trash?
By Sherry Listgarten | 2 comments | 1,666 views

Think about helping others in our coronavirus-affected area
By Diana Diamond | 2 comments | 1,324 views