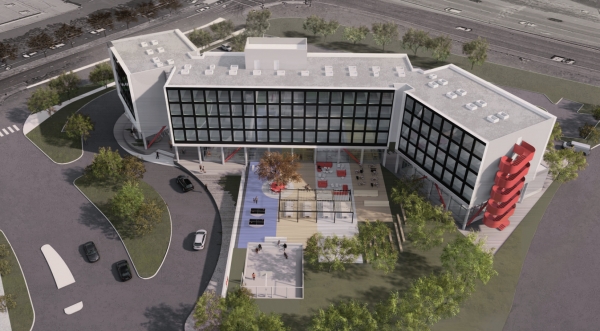 A rendering of the citizenM hotel proposed on Facebook property at the corner of Chilco Street (rear left) and Bayfront Expressway (rear right) along the city's Bay side. Rendering courtesy of citizenM /Gensler/city of Menlo Park.

These developers never want to abide. I say offer less rooms and require more parking. Also how many stories? Environmental on wind and climate changes to MP properties west of the project including Bell Haven and MP west of 101.

Battery farm for Facebook employees- they showed a picture of the room and it looked like Kenau Reeves waking up in the Matrix. Bad shoe-box building with a decorative red stair.

How about a big fat NO to Facebook, always trying to bend the rules after the fact. Breach of contract. And it’s not a “bummer” that the waste water is maxed out. It’s a reason to deny this whole development. When is this development frenzy going to end?

Keep building, keep increasing capacity. Every single homeowner in MP and Atherton is rooting for you.

Having lived here since 1979, I will remember Facebook moving in as the beginning of the end. The developer will get what they want. Someone will have their palm greased. Traffic will get even worse. And 0 new development in Sharon Heights to help with caps or state mandates or low income housing. I hope the whole place falls into the bay.

Oh and get out of my face with the artwork. I. Don’t. Care. Nobody cares. We can’t afford a night at this hotel and will never see the art.

Report Objectionable Content
Email Town Square Moderator
17 people like this
Posted by Brian
a resident of Menlo Park: The Willows
on Jul 23, 2019 at 9:22 pm

This is ridiculous. They should either build what was approved without any changes to size or parking spaces or they should reapply for a permit for the new building and run the risk of the project being rejected outright. Do we need another hotel in that area? There is already a new one over there.

Report Objectionable Content
Email Town Square Moderator
4 people like this
Posted by MP Resident
a resident of Menlo Park: Downtown
on Jul 24, 2019 at 2:22 am

There are plenty of hotels in the world with limited parking. There is a really simple answer - if you need to park, you reserve a parking space. Once they have reserved all of the parking spaces, further reservations are "no parking included" only. This would enable any mix of parking and rooms, with the caveat that you might strand room capacity (not the city's problem!) if the parking is sold out.

People staying there for Facebook mostly do not need rental cars (Uber/Lyft from the airport and walk to the office). *Some* people staying for other reasons will bring cars, but quite a few won't - especially since this hotel will likely appeal to a younger demographic who is much less likely to be a licensed driver, let alone rent a car.

Report Objectionable Content
Email Town Square Moderator
6 people like this
Posted by Martin
a resident of Menlo Park: Downtown
on Jul 24, 2019 at 1:02 pm

What's wrong with more rooms? That just gives us now tax revenue and less parking will lead to less traffic.

Let the hotel worry about running shuttles to SFO and Caltrain. Plus, if we are spending money on Dumbarton service, why sabotage ridership by making driving easier and cheaper?

Report Objectionable Content
Email Town Square Moderator
4 people like this
Posted by Bob
a resident of Menlo Park: The Willows
on Jul 24, 2019 at 1:11 pm

Putting a cap on hotel rooms is ridiculous. No wonder hotel rooms in this area are redicously priced for poor quality when the council is artificially limiting supply. Stop wasting time driving community engagement on artworks and focus on approving more requests for increased housing and accommodation!

Report Objectionable Content
Email Town Square Moderator
45 people like this
Posted by long timer
a resident of another community
on Jul 24, 2019 at 1:33 pm

I grew up in Menlo Park...BACK when it was quaint charming Menlo Park. This City has sold it soul to the devil. I left California years ago when all this madness started. What a total shame. This is NOT the Menlo Park I knew and loved.

Report Objectionable Content
Email Town Square Moderator
10 people like this
Posted by What next?
a resident of another community
on Jul 24, 2019 at 8:26 pm

Just say NO? Menlo Park can't ever say NO to Facebook. The company owns the town. Be thankful Facebook does not require that the town change its name to FRIENDMEVILLE.

The ConnectMenlo plan was supposed to last until 2040, with a limit of 400 new hotel rooms in the Bayfront area. With other known hotel proposals, a General Plan amendment would be necessary because the total would exceed 400. Our city has no need to approve more than what was in the Plan. Is Facebook willing to include a smaller hotel in its Willow Village proposal?
Saying "no" at this time is good until appropriate phasing of the approved 400 rooms can be figured out. Our community is besieged with development and an inadequate support infrastructure. There is no benefit to approving more than the Plan.

Keep eyes open - be sure that this hotel doesn't become longterm stays for workers and consultants. The attractive Transient Occupancy Taxes disappear when that happens. Project approvals should put constraints on such possibilities for this and other hotels.

Report Objectionable Content
Email Town Square Moderator
6 people like this
Posted by Robert
a resident of another community
on Jul 25, 2019 at 1:09 pm

People drive in this area. Period. One parking spot per room is the MINIMUM that is needed. Where are the employees of the hotel parking? "Overflow parking" is a joke - some people may take ridesharing to get to the hotel, but most people will drive and need a place to park. Just. Say. No.

Report Objectionable Content
Email Town Square Moderator
10 people like this
Posted by Peter Carpenter
a resident of Atherton: Lindenwood
on Jul 25, 2019 at 1:19 pm