Staff recommends scenario that would accommodate about 180,000 riders, require more than $22B in investment 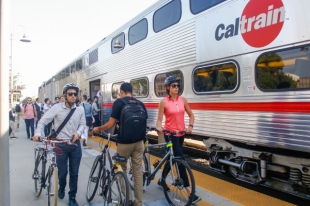 Commuters on Caltrain head to the bike car at the downtown Palo Alto station, one of four north county locations where the agency is considering to build short four-track segments to accommodate more trains. Photo taken in 2017 by Veronica Weber.

Caltrain's plan to expand and modernize its train system will hit a critical juncture next month, when the agency's board of directors considers a new proposal that would roughly triple ridership by 2040 and that would require the installation of new passing tracks in various sections of the system.

On Monday, July 23, the agency took a step toward adopting a new long-term vision when staff recommended tripling the agency's ridership, significantly increasing train frequency and building passing tracks at several sections of the rail corridor, including in the north Santa Clara County segment that includes Palo Alto and Mountain View.

In a special YouTube Town Hall, Caltrain staff stated that the agency should move ahead with what it's calling a "moderate" growth scenario, which is one of three alternatives staff has been analyzing as part of its business plan.

In his presentation on the "Service Vision," Caltrain Policy Director Sebastian Petty highlighted some of the benefits of the moderate scenario: faster and more frequent service, more Baby Bullet express trains, and improved connections throughout the system. If implemented, the scenario would accommodate about 180,000 riders, roughly triple Caltrain's current ridership.

The additional capacity, he said, is equivalent to building five freeway lanes during peak commute hours.

In making the case for the staff recommendation, Petty cited Caltrain's already "robust market," which the agency believes will grow "substantially" over time. He cited regional projections suggesting that the population within 2 miles of the Caltrain corridor will increase by 1.2 million people by 2040, a 40% increase.

"We think there's going to be a lot more demand from land uses in the corridor and we'll have a more connected corridor that's better integrated with the rest of the region's transportation system," Petty said. "This leads us to believe we're looking at a lot of potential riders in the future."

In endorsing the moderate-growth scenario, Caltrain staff also left the door open for potentially pursuing the high-growth scenario in the future. While the latter would make trains even more frequent, it would require greater infrastructure investment, including more than 15 miles of four-track segments throughout the system.

"There just are a lot of questions and further study that's needed before we would feel comfortable advancing that specific vision directly, but we don't want to preclude it," Petty said.

If approved by Caltrain's board of directors, the staff recommendation could have profound implications on Palo Alto and other communities along the rail corridor, which was constructed more than 150 years ago and which many believe is no longer adequate for accommodating the area's population growth. Depending on the path Caltrain ultimately chooses to pursue, its projects have the potential to boost — or upend — local plans for grade separation (that is, the physical separation of the tracks from crossing streets at existing intersections).

Palo Alto is now in the midst of selecting its preferred alternatives for its four rail intersections, with the City Council scheduled to make its decision in October. The city is also moving ahead with plans to place a business-tax on the November 2020 ballot, proceeds from which would be used to fund the rail reconfiguration.

If implemented, Caltrain's moderate scenario would require a north Santa Clara County station — either downtown Palo Alto, California Avenue, San Antonio Avenue or Mountain View — to be reconfigured to accommodate short four-track segments, Petty said. The four tracks, he said, would be needed so that faster trains, including those run by high-speed rail, can pass slower ones at multiple points in the corridor.

Petty noted that the rail corridor has been in place for well over a century and that many of the communities "have grown up around us."

"It means we don't necessarily have a lot of room around our tracks. We go right through the middle of the downtowns of a lot of different cities along the corridor," Petty said. "That makes us a really great community asset, but it does mean there are some real impacts to being on rail corridor and real limitations in terms of our ability to expand the infrastructure."

At the same time, Petty pointed to the many advantages of moving ahead with two higher-growth alternatives over the baseline scenario, which would require most trains to skip some stations. While this model would result in more trains, it would also come with "bunched, irregular service," with riders at times needing to transfer to get to their destinations.

The moderate scenario, by contrast, would result in a more even service, with trains coming in roughly every seven-and-a-half minutes. The plan also calls for Baby Bullet express trains to run every 15 minutes.

"It's very much a show-up-and-go sort of service," Petty said.

One major challenge that both Caltrain and local communities will have to confront is the high costs of the needed improvements. Caltrain is already moving ahead with its $2.3-billion electrification process, which is expected to be completed in 2022. The Caltrain plan also considers the $3.3-billion downtown expansion in San Francisco; the $3.4-billion Diridon station reconstruction project in San Jose; $2.6 billion in high-speed-rail investments; and $6.9 billion in planned grade-separation projects throughout the system.

When coupled with further improvements that Caltrain itself would have to make to accommodate growing ridership (including an updated train fleet and a new maintenance facility), the level of overall investment would range from $22.1 billion in the baseline scenario to about $30 billion in the high-growth scenario, Petty said.

While the plan doesn't explain where the money will come from, it makes a case for adopting the 2040 vision to create a "big tent" that, according to Caltrain staff, "shows how all of the investments currently being planned in the corridor can fit together as part of a cohesive whole, with expanded Caltrain service further enhancing their value and importance."

The service-vision document that Caltrain released July 23 is part of a broader "business plan" that the agency is preparing to adopt by early 2020. The Peninsula Corridor Joint Powers Authority (Caltrain) board of directors plans to discuss the staff recommendation at its next meeting on Aug. 1, with the goal of adopting the service vision in October.

The vision, according to a staff report, will create "a framework that allows staff to 'work backwards' from 2040, developing analysis showing how the Vision can be phased, funded and implemented over time." The analysis will be included in the business plan.

Caltrain CEO Jim Hartnett said in a statement July 23 that the service vision "ensures Caltrain can continue to be what it has been for so many years: an indispensable resource for the region and our riders."

"Our long-range vision will improve frequency, sustainability and connectivity, while ensuring that Caltrain continues to add value to communities at every stop along the way," Hartnett said.

We are really looking forward to faster and more frequent Caltrain service. We badly need alternatives to the traffic jams on Hwy 101.

So much for off the beaten track.
Just a few questions and observations.
And where are all these new riders supposed to park?
What are the psychological impacts to those living near the tracks?
Elevated or underground tracking? How many homes and businesses will lose their property? What about the constant train noise? A giant berm dividing the peninsula? Who's going to pay - all of us taxpayers, and thru the nose.

"What are the psychological impacts to those living near the tracks?"

Given the noisy gates, bells and horns blown at crossings - I suspect: frustrated. Raise the tracks. Look at San Carlos, San Bruno etc..

Happy to help you get an answer. Can you answer the following for us?

What are the psychological impacts to those living near:
freeways
ECR
under flight paths
next to noisy neighbors
forced to listen to those ridiculously loud bikes and hotrods
noisy gardeners
barking dogs
etc.........


Report Objectionable Content
Email Town Square Moderator
2 people like this
Posted by Menlo Voter.
a resident of Menlo Park: other
on Jul 29, 2019 at 7:07 pm


What a great idea. Increase the number of trains while doing nothing to create grade separations so anyone going east or west can sit in traffic forever waiting for trains. Brilliant! Not all traffic is north/south commute traffic. Duh! If Caltrain wants to increase the number of trains, then they should deal with the impacts. Let them build grade separations. On THEIR dime.

Report Objectionable Content
Email Town Square Moderator
10 people like this
Posted by Robert Cronin
a resident of Menlo Park: The Willows
on Jul 30, 2019 at 10:02 pm

Robert Cronin is a registered user.


If Caltrain becomes a show up and go system, it would be a real game changer. A real transit system, at last! Let's get to work on more grade separations now.

Report Objectionable Content
Email Town Square Moderator
2 people like this
Posted by Karen
a resident of another community
on Aug 1, 2019 at 8:34 am

Sounds like a CON JOB AHEAD OF A TAX MEASURE.

The first few seconds after awakening; before I remember the virus
By Chandrama Anderson | 0 comments | 3,279 views

Think about helping others in our coronavirus-affected area
By Diana Diamond | 6 comments | 2,489 views