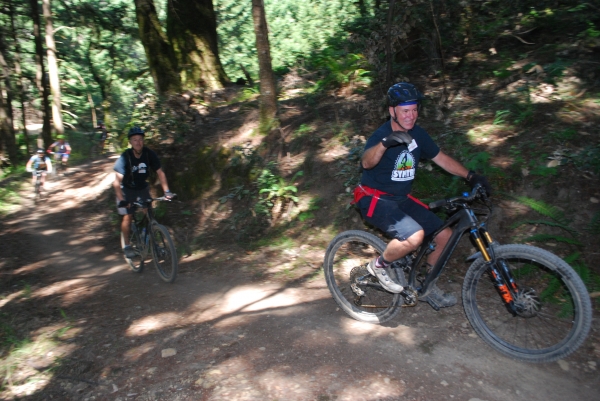 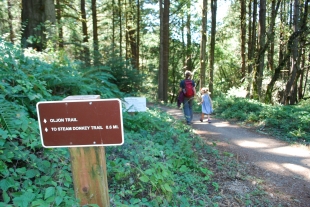 With a snip of a pair of comically large scissors, directors and staff at the Midpeninsula Regional Open Space District cut a ribbon Sept. 6 to signal the opening of the new Oljon Trail, a new 1.3-mile trail segment in El Corte De Madera Creek Open Space Preserve.

The preserve, which already draws mountain bikers and hikers from the region with its 34 miles of trails and dense redwoods, now offers a new reason for its many visitors to venture onto its lush redwood-sheltered paths.

Chris Barresi, an area superintendent with the district who oversees the rangers of the preserves near Skyline Boulevard, said that the preserve has a unique draw for mountain bikers because of its high concentration of technical trails.

Just after the ribbons were cleared, an eager squad of mountain bikers took off down the well-groomed path, anticipating the hallmarks of a good trail: ups and downs, turns that hug the contours of the mountain, and the swerves and swoops that make riders feel like they're on a roller coaster and obstacle course at the same time.

At least, that's how mountain bikers Jill Henrich of Emerald Hills and Judy Silverman of Sunnyvale, affiliated with the Silicon Valley Mountain Bikers group, described their dream trail before they set off as some of the first riders to experience the new trail.

Early reviews of the trail posted online indicate that it offers a satisfactory, fun, intermediate-level ride.

The trail is named after the native people who first inhabited the area, according to district spokesperson Leigh Ann Gessner.

But the ribbon cutting symbolized something bigger than even a fun new trail to ride: It signaled the district's completion of an 18-year restoration project at the 2,906-acre preserve to protect the San Gregorio watershed.

The preserve is located just off of Skyline Boulevard, situated between the Purisima Creek and La Honda Creek open space preserves.

It's also known by many as "Skeggs," since for many years it was accessed primarily at a parking lot at the north side of the preserve called Skeggs Point.

(The lookout is named after Colonel John Hunt Skeggs, a Caltrans engineer who, during a career with the transportation department between 1919 and 1952, supported the construction of highways 17 and 35, as well as U.S. 101, and an El Camino Real widening project in the area, according to a book about the history of Highway 17.)

According to Gessner, the area had been heavily logged since the 1800s, and many of the old logging roads at El Corte de Madera Creek – which, fittingly, means "cut of wood" in Spanish – were eroding, causing sediment to build up in the creeks.

The area was also used heavily by motorcyclists before the open space district acquired the property in 1988. Many of the trails were overly steep, which, combined with highly erosive soils, increased sediment in the creeks, explained Ana Ruiz, general manager of the district, during the ribbon-cutting ceremony.

That sediment had been threatening the habitat of protected fish species that access various creeks in the watershed, such as steelhead trout and coho salmon, and had affected their spawning patterns.

Much of the work on the watershed restoration project involved remediating land that had been environmentally impacted before the district acquired it. The long-term project involved 24 miles of road and trail work, 10 bridges, six puncheons or foot bridges, and 5 miles of decommissioned trails, Ruiz said. Early monitoring signs indicate that sediment is, in fact, being diverted from the waterways, she added.

The project involved partnerships with the National Marine Fisheries Service, California Department of Fish and Wildlife, and the Regional Water Quality Control Board. The project also received local public support in the form of volunteer hours and dollars.

According to Aleksandra Evert, volunteer program lead with the district, volunteers helped to tamp, or pack down the dirt, as well as remove roots on the trail. They also helped to "duff" the trail – a term used to describe the process of bringing brush and leaf litter back to the trail to make it look more natural and help slow erosion.

The project was supported with funding from Measure AA, a $300 million general obligation bond approved in June 2014 by voters in the district that is used to protect, restore and enhance open spaces, as well as improve public access to such areas.

During the trail's construction, special consideration was given to the mountain bikers who use the trail system to provide them a safer way to get around the park than a common route that requires cyclists to exit the park and loop back via Bear Gulch Road and Skyline Boulevard, which can be, as one cyclist noted, "a little sketch."

"Building high-quality trails is one of the things MidPen does best," Gessner said. "It's an art and a science."

Like this comment
Posted by Angela Hey
a resident of Portola Valley: Brookside Park
on Sep 10, 2019 at 10:47 pm

Here's a map - the preserve is roughly opposite the top of Wunderlich for those who wonder where it is.

The first few seconds after awakening; before I remember the virus
By Chandrama Anderson | 0 comments | 3,280 views

Think about helping others in our coronavirus-affected area
By Diana Diamond | 6 comments | 2,489 views