Earthquake felt in many Bay Area cities, including Menlo Park, on Monday night 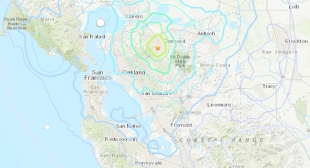 An earthquake with a preliminary magnitude of 4.5 and centered in the Pleasant Hill area could be felt in Menlo Park on Oct. 14. Image courtesy U.S. Geological Survey.