The fight isn't over yet for Feldman's Books, Menlo Park's last used bookstore 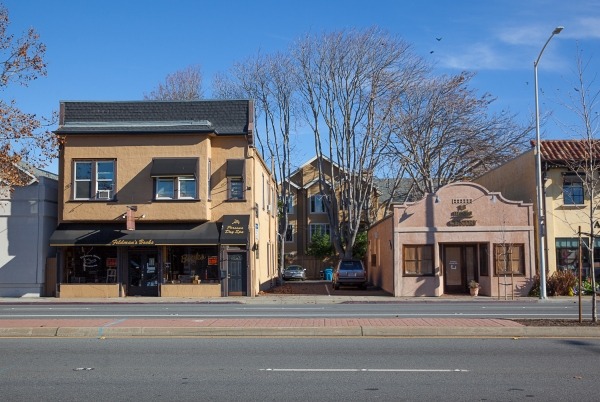 Feldman's Books and its neighbor, 1162-1170 El Camino Real, face demolition to make way for an apartment building if a redevelopment proposal for the site is approved. (Photo by Michelle Le/The Almanac.)

For many local bookworms, Menlo Park is synonymous with a certain institution in town that starts with F and has "book" in its name.

No, it's not Facebook. It's Feldman's Books, a used bookstore threatened with demolition.

The shop is an unassuming 23-year-old bookstore in a century-old building at 1170 El Camino Real where people can spend hours perusing its maze of shelves, inhaling the dusty aroma of first-edition tomes from a bygone era.

Today the store and its neighbor at 1162 El Camino Real — the current home of SafeSpace, a mental health service organization for teens — face likely destruction as plans move forward to redevelop the site, replacing them with nine apartments.

The development proposal comes from Prince Street Partners, led by Chase Rapp and Brady Fuerst, who are also redeveloping 506 and 556 Santa Cruz Ave. and 1125 Merrill St. in Menlo Park as new mixed-use buildings.

As part of the approval process for those buildings, the developer agreed to dedicate two apartments at the El Camino Real project to be below market rate. One of the conditions of that agreement was that the new below-market-rate units should be built within two years of the occupancy of the other buildings, creating a sense of urgency to get the apartments built.

During a Menlo Park Planning Commission discussion of the proposal on Oct. 21, commissioners heard from a number of concerned locals who urged them to find a "third way" to preserve the bookstore while still complying with the California Housing Accountability Act, which states that if a housing development proposal complies with local zoning rules and the city's general plan, the relevant city council or planning commission has to approve it. That law has been in effect since 1982 and was strengthened in 2017.

Aiden Stone, a resident of unincorporated Menlo Park, carried a bag of well-loved books, many first editions, to the podium during the public comment portion of the meeting. He pulled out examples of some of the great finds he's made at Feldman's: "Don Quixote," Dr. Seuss, Julia Morgan, Ernest Hemingway. "You can get real treasures here," he said. "Look at the books you'd be missing out on. … These bookstores are necessary." He urged the commission to find a better alternative to demolishing the shop.

While acknowledging that it has limited veto power when a proposal complies with city zoning, the commission explored the possibility of at least getting more housing built on the site. Commission Chair Andrew Barnes said he wants to see more residential units there, and added that he believes the city would be willing to negotiate on the two-year deadline for the below-market-rate units if Rapp and Fuerst were to consider increasing the number of apartments in the project.

The developers told the commission that they were open to the idea and agreed to a meeting with city staff to discuss it, but emphasized that they want the process to move quickly.

Rapp added that there are a number of vacant retail locations on Santa Cruz Avenue where Feldman's could relocate, though many would be smaller, and said he wants to see the owner exploring other locations.

The future of Feldman's Books

When The Almanac talked to bookstore owner Jack Feldman two days later, he said he was open to relocating the shop, but would prefer to stay in place – moving the shop's inventory of 50,000 books somewhere new would be no small feat.

He said he's not yet ready to retire – at 63 he's got energy to take on another decade of running the bookstore if there's a way to make it work. But, he noted, the rents in the area are "ridiculous."

Even if the developer didn't build the project and displace the bookstore, he added, the owner could still raise the rent and price Feldman's out that way.

Since he and his brother, Steve, began the bookshop 23 years ago, he added, retail rent has about tripled. They've adapted by selling some books online and taking a selective eye toward what inventory goes on the shelves, but he acknowledged that used bookstores are in trouble.

"Every town in the Peninsula used to have a bookstore," he said. "Now they're a pretty endangered species."

With the bookstore's future up in the air, he said, he's been managing with an existentialist's take-it-as-it-comes attitude. Still, he added, "I appreciate everyone coming out and standing up for us and appreciating us. It feels good."

"We're just going to keep on going and hope for the best," he said.

How about the vacant thrift store next to Ann's on Santa Cruz. The landlord only wants $25k/month.

El Camino and the immediate blocks surrounding El Camino in Menlo Park have something like 8 massive new building projects or reconstructions going on right now, some of which comprise a huge amount of land and new square footage being built. All of these projects are going to add some combination of houseing and retail space and the impact on this community, between the added businesses and families, is going to be huge. Am I the only one who finds the prospect of all this change at once rather alarming?

Aren't there any maximums for how many new projects and square feet can be added to a community at once? Especially one with no room to expand roadway arteries?

It seems so unwise to start another demolition and reconstruction project in the middle of all this ongoing construction, when we don't know if or when all of that new space is going to be filled or left vacant for years. The problem is, developers starting now and planning to get $5.45/sq.ft because of past shortages may find that, when the dust settles on 8 new developments, the over-supply depresses the price back down to $2.00/sq.ft.

Menlo Park Planning Commmission should assess whether or not all of this development is going to be filled or if we are going to have huge vacancy rates, before they rubber stamp yet another project adding the same type of footage as everything else, and which is not starting from unused space but which includes the demise of one of the most beloved local institutions that have made this town appealing in the fist place.

This policy of "Just Say Yes" to almost any and every development proposal is destroying the retail and small businesses in our city. More and more high-rise apartment complexes in the downtown will increase traffic and put additional strain on our schools and infrastructure, and most people want to live in single family homes with backyards, not in stack-and-pack housing projects that developers prefer to build so they can make more money.
I understand there's a lack of housing, but there must be other solutions that won't decimate our city's character and demolish the shops and stores we love and that provide the things we need and want.
I understand that Charisma salon and Koma Sushi are soon to be likewise placed under the chopping block.
What can be done?

Report Objectionable Content
Email Town Square Moderator
3 people like this
Posted by pearl
a resident of another community
on Oct 30, 2019 at 1:35 pm


So sad to see what is happening to Menlo Park. I left Menlo Park 25 years ago, after having lived there for 50 years. So glad I did. Breaks my heart to see greedy landlords taking over the town.

Feldman's has to be considered a local treasure. With all the new tax revenue coming into the city from the many other new developments, this one would be little noticed no matter what is built there.
I agree this is a moral dilemma, we need the under-market housing and we need this outstanding used bookstore run by someone who really knows literature and books.
I plead for a 3rd way.

Report Objectionable Content
Email Town Square Moderator
7 people like this
Posted by Ash
a resident of Menlo Park: Downtown
on Jan 14, 2020 at 1:22 pm

I attended the planning commission hearing for deciding on the historic nature of the Feldman's building yesterday. The commissioners were sympathetic but unfortunately the motion against declaring it a historic building was carried in a close vote (4-3). The developer, Mr. Rapp, was sitting in one of the rows, and he did not seem to have much sympathy for the store or the building. He made a big deal about not evicting the owners with a 30 day notice even though he could have, and in terms of support for moving to another place, said that the best he had offered was some help on a Saturday. I would say that if Mr. Rapp feels he can move all 50,000 books in Feldman's to another location, he should knock himself out trying to do it. Another piece of civilization and culture sacrificed at the altar of "development".

why is it the developers responsibility to help move the store? Maybe Aiden Stone and other patrons of the store should do something to help? Did anyone offer to help with higher rents or moving books? I doubt it.

if you want to a nice play to discover used books, the MP library is open everyday!

Report Objectionable Content
Email Town Square Moderator
5 people like this
Posted by Progress
a resident of Atherton: West Atherton
on Jan 15, 2020 at 9:23 am

I love all of the long time Menlo whiners lamenting the loss of their beloved bookstore. Where were you all decades ago when they were bulldozing the gorgeous and productive orchards that filled the Penninsula? Oh yeah, saying that your homes were progress and farmers and nature lovers should come into the “real world.” Now the cycle repeats except you’re on the other end. Silicon Valley is becoming denser but you want to keep those newbies out of “your” beloved Menlo. Psssh. It never was yours. People in this town love the idea of a Feldman’s but where are your dollars? If you all dusted the cobwebs off your wallets and spent money there it wouldn’t be an issue because they would have the money to upgrade to new retail space. But you won’t. And the dingy building he’s in and the trash across the street will be redeveloped as it should, And new people will claim their beloved Menlo. Go find a small town in Trump country. They hate change too.

Repairing a Disagreement with your Beloved & “Physical” vs. “Social” Distancing
By Chandrama Anderson | 1 comment | 2,390 views