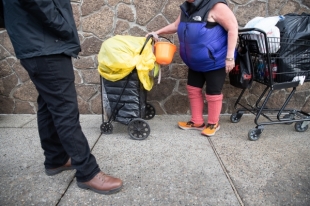 Steven Hough, a member of homeless aid nonprofit LifeMoves who works in homeless outreach, checks in with a client on Santa Cruz Avenue in Menlo Park in April. (Photo by Magali Gauthier/The Almanac.)

I've heard of investment firms and realtors using the "boutique approach" but never a police department. Seems a bit inappropriate when referring to homelessness when it's most often applied to dealing with the wealthy end of the spectrum. Maybe the chief's been spending too much time along Santa Cruz Ave. with all its "boutique" shops. Of course boutique also refers to the customized approach in which case not so far off.

However best to let an experienced social worker make the call on sending someone out of their comfort zone.

Nice! Dump our problems onto SF, and then we can all complain about how SF can't do anything right!

(ya know, except for the person with the actual problem)

Birdnscrap is a registered user.


If someone is delusional, how can Chief Bertini say, "she is a functional adult?"
This seems like a pretty irresponsible way to treat an impaired person, no matter how much you wish they would go away.

Report Objectionable Content
Email Town Square Moderator
5 people like this
Posted by Clunge
a resident of Menlo Park: The Willows
on Nov 9, 2019 at 12:46 pm

It’s a growing problem and it won’t get better - government won’t spend money to help. When the mental institutions closed the problems grew.
No amount of police, city or local support will solve the homeless situation- there’s three types of homeless- 1. truly down on luck - 2. mentally ill and 3. drug addicts.

But, with all that, the tax payers business owners and communities suffer when we can’t expect everyone to abide by laws and common decency.

Report Objectionable Content
Email Town Square Moderator
11 people like this
Posted by wotta pal
a resident of Atherton: other
on Nov 9, 2019 at 12:55 pm

"truly down on luck"

well, this does not appear to apply to the woman in question, nonetheless I can help translate that statement for you:

"truly down on luck" = person stuck on the corporatocracy treadmill that drives wages down to a non living wage.

It rarely happened when we had unions protecting working folks.

A lot of this started about the time Reagan came along... hmmmmm...

Bertini said. "Again, it's unfair that the police department gets saddled with it."

I have already stopped shopping at the pharmacy she lives in front of because of this and will not enter the Starbucks either due to the vagrants smoking pot there while neighborhood school children stop by to get a drink and socialize.

The camp that wants to defend the unhoused are welcome to take these people into their homes, otherwise, please police, please enforce the laws, make them move along, please do not let our town get overwhelmed.

When I first moved here, I thought the "no overnight parking" rules where harsh, but turns out to be a truly great idea as we do not have the RV problem that neighboring towns currently have.

Bertini, if this is NOT THE JOB of the Menlo Park police, please let the taxpayers and city council know so that the city council can take action, hire side walk cleaners, whatever to make sure our town stays habitable for the uses it was and is intended for.

Report Objectionable Content
Email Town Square Moderator
7 people like this
Posted by Murican!!
a resident of Atherton: West of Alameda
on Nov 10, 2019 at 8:28 pm

Dumping our problem on someone else. The American way, these days?

Report Objectionable Content
Email Town Square Moderator
2 people like this
Posted by whatever
a resident of Menlo Park: Central Menlo Park
on Nov 11, 2019 at 8:48 am

New Guy
You can always use the rear entrance to the pharmacy, if you can handle the steps up to the door.

Report Objectionable Content
Email Town Square Moderator
2 people like this
Posted by isaidso
a resident of Menlo Park: other
on Nov 11, 2019 at 1:40 pm

Gavin Newsom did the same thing with busloads of SF homeless and he morphed into our Governor.

You mean a police chief did this and works in Menlo Park? In a liberal state?

Does he have the authority to make policy for us residents? Is the City Council above or below him? What do they have to say?

Huh. I thought he was from a conservative, to-the-right place. Well, well, this now has my attention.

Re: I said so: please reference your information.

I noticed the photo to the right of the story, and the caption that mentions "Life Moves," a homeless outreach organization in Menlo Park. I've lived in MP 20 years, and this is the first time I've heard of it. Could The Almanac do a story on this organization and others serving or reaching out to homeless people. And could we who aren't homeless find ways to support these community organizations' efforts. Most, I imagine, would appreciate donations.

Report Objectionable Content
Email Town Square Moderator
15 people like this
Posted by laughing
a resident of Menlo Park: other
on Nov 12, 2019 at 4:57 pm

All of this mushroomed out of control when Sanitoriums were closed in the 60's. Jails and Emergency Rooms have had to deal with the mentally ill which benefits NO ONE. Bring back a proper place to put these truly mentally ill people to be properly and humanely treated and the majority of the this homeless nonsense will be solved. Most (not all) of the homeless population are suffering from serious mental illness. This solution is a win win for everyone.

Report Objectionable Content
Email Town Square Moderator
5 people like this
Posted by Renee Batti
editor of The Almanac
on Nov 12, 2019 at 5:11 pm

Renee Batti is a registered user.


Senioracit, LifeMoves has been a beneficiary of The Almanac's annual Holiday Fund, and will be again this year (we'll soon be providing information about all of the nonprofits we -- our readers, in fact -- support through this fund). Here's a link to last year's story:

Thanks for your interest.

Wonder why are we screaming because city officer pays the ride for a homeless person to relocate. What don’t people complain about other city across country shipping homeless to our star. They buy a one way airplane ticket so the come to our state. Now we have to deal with that. I personally