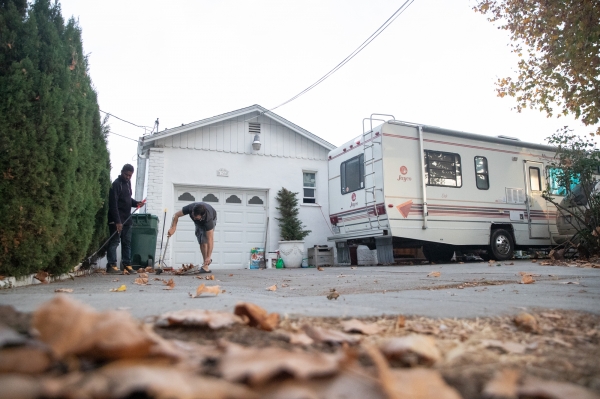 Alex Mulholland and Malik Hogan sweep the driveway near the RV where Mulholland lives with Arlena Bain, the homeowner's great-granddaughter, in Menlo Park's Belle Haven neighborhood. Bain says she hasn't yet been able to find a spot for the RV at nearby RV parks or safe parking locations. (Photo by Magali Gauthier/The Almanac.)

If the City wants to partner with LifeMoves and create housing - permanent and emergency housing - at the USGS then I'm all for it. Allowing RV's to park there without support support services such as bathrooms, showers, laundry facilities, waste disposal, and 24 hour security patrols is a nightmare. Considering that most of the RV's used for housing and parked on the streets are actually being RENTED by slumlords who are charging the occupants, there will be many greedy businessmen taking advantage of the "solution" proposed by Mueller. And if the City or a Non Profit were to provide the proper infrastructure necessary to accommodate an RV park at the USGS, why not just create low income housing there? Also, there is the need for emergency shelters in the area during natural disasters or other emergencies, war time or economic emergencies. My suggestion is to create an emergency shelter with all the necessary amenities and also build low income permanent housing on site at the USGS. The emergency shelter can be used by people on the wait list for permanent housing and could also be used by the community in times of emergency. But just opening up the parking lot and allowing RV's to park the there is not the way to address the current crisis and comes with a whole host of problems. I would be in favor with an RV park at the USGS only if all the amenities were provided, including security and that it was bundled with a package to provide permanent low income housing and related services. Otherwise the RV park will grow out of control and impact the surrounding neighborhood, because there IS a housing crisis that requires more than a bandaid approach.

These bleeding hearts won’t be happy until we’re all sleeping in tents right next to the bums on the street. That’s where “equality of outcome”—like being able to live in Menlo Park—leads.

Most people haven’t earned living here, but if you insist they must be able to anyway, this is the outcome you get. RV parks and tenements in what used to be a beautiful, pleasant place to live.

Can’t wait to see how we’re forced to prop to their self-esteem so they feel “welcome” in a place they haven’t earned the ability to live for themselves.

My understanding is it wouldn’t be permanent but only until the new development projects we brought forward.

My understanding is it wouldn’t be permanent but only until the new development projects were brought forward.

Report Objectionable Content
Email Town Square Moderator
2 people like this
Posted by A Nightmare
a resident of Menlo Park: Linfield Oaks
on Nov 22, 2019 at 8:52 am

Report Objectionable Content
Email Town Square Moderator
1 person likes this
Posted by A Nightmare
a resident of Menlo Park: Linfield Oaks
on Nov 22, 2019 at 11:27 am

Not permanent but it would still take YEARS before any new low income housing is ready, and in the meantime would create a mess without the proper infrastructure in place to support what is essentially a mobile home park at the USGS. You want immediate solution, then the City could just eliminate the restrictions on RV parking in driveways. Just until the housing crisis is solved, so it wouldn’t be permanent ;)

Report Objectionable Content
Email Town Square Moderator
8 people like this
Posted by Permanent?
a resident of Menlo Park: other
on Nov 22, 2019 at 12:01 pm

So you are saying a professional homeless services nonprofit provider like LifeMoves, as well the City and County whose mission includes health and human services, as well as the Federal Government who owns the land, wouldn’t make sure proper amenities were provided?

Hard to imagine that wouldn’t be in any plan developed.

I support doing whatever we can to support people who are being priced out of their homes. It is known as economic eviction. Moving away is not a solution if it makes it impossible to earn a living and takes you away from whatever support network you have that helps you cope.
Support services to an RV parking lot are a great idea and allowing RV's in driveways seems reasonable as well given the present situation. I would hope that there would be some rules to go along with that. When my neighbors let their relatives park in their driveway, the only issue I had was that they were smokers and I got their second hand smoke. Ugh.
The concept of slumlords renting RV's is a new one and it seems worth city time to check into it so we have the relevant facts.
Many homeless people are working hard and providing needed services and it is worth some time and money to make humane allowances in a time of crisis. I do hold all city councils responsible for allowing run-away development of office space without the corresponding housing. Facebook, Google, Apple and Stanford have a lot to answer for but the city councils let them overbuild.

Report Objectionable Content
Email Town Square Moderator
2 people like this
Posted by A Nightmare
a resident of Menlo Park: Linfield Oaks
on Nov 22, 2019 at 3:49 pm

I'm saying that to set up a RV Park on Federal Land and in conjunction with City and Non Profit like Life Moves is going to take a LONG time. Simple solution is to rescind the Menlo Park law restricting the parking of RV's in driveways. And put the efforts into providing actual emergency SHELTER and long term low income housing - be it at the USGS or elsewhere. But if Mueller wants to solve the immediate problem of RV dwellers not being able to park in driveways, then just change the City Ordinance. Problem solved. Waiting to coordinate with the Feds will take years.

All of this will take a very vey very long time. I hope this heartfelt effort from the mayor does not deter Ms. Hilarios and MPPD from clearing our neighborhood as in the case of the earlier Almanac article Web Link Web Link

Report Objectionable Content
Email Town Square Moderator
4 people like this
Posted by Flummoxed
a resident of Menlo Park: Downtown
on Nov 23, 2019 at 6:03 am

I’m a longtime Menlo Park property owner and I really don’t see the point of this driveway parking ban. In general, I’m skeptical as to whether a parked RV materially reduces the value of neighboring properties, but I seriously can’t imagine it damaging the value of *Menlo Park* properties at this point in time. The simplest thing to do would be to let people live. Impose a moratorium on driveway parking enforcement until more affordable units can be built.

Report Objectionable Content
Email Town Square Moderator
1 person likes this
Posted by Bolderdash
a resident of Menlo Park: Downtown
on Nov 23, 2019 at 6:57 am

I read the article @MPresident. Mayor Mueller did not deter the police department from enforcing the overnight parking ban in the Allied Arts/Stanford Park neighborhood, nor any neighborhood. In the article you refer to the Mayor asked for one extension to move an RV parked in a driveway, during the holiday season. That request was denied. That’s hardly deterrence.