Barber retires his clippers after decades at Ladera Country Shopper 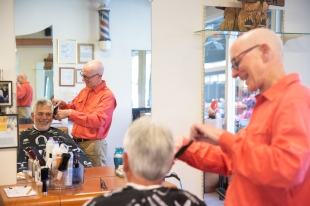 Steve Cervelli cuts Juan Navarro's hair, and has been doing so for nearly 40 years. (Photo by Magali Gauthier/The Almanac)

1 person likes this
Posted by JoAnn Loulan
a resident of Portola Valley: Los Trancos Woods/Vista Verde
on Nov 27, 2019 at 12:44 pm

This is such a sweet story. My son Gardner came to Steve when he was 5–and stopped only because he graduated college & moved away for good. It was so sweet how Steve was with children and how he was able to relate to teenagers as well. Glad you are retiring Steve. Our town will miss you. And on a different note my cousin Sandie was in your same Buddhist organization as well. Please be well and have a good holiday season. JoAnn

Steve you are going to love retirement. I wish you and Maureen the best.When you are visiting your cousin stop by the house. It would be great to see you. When you start missing customers just meet at the Konditorei. I was there this morning it was fun. Much love. Patty

Our 3 sons started with Steve for their first haircuts and stayed with him through college. They loved finding the Mad Magazine in the pile! I think the reason the didn’t grow their hair long was because they liked going to Steve. He made it fun, talking with the kids. Thank you, Steve. I have a feeling you’ll be just fine in retirement!

Anne Le Ziblatt, formerly of Tamarine and Bong Su, is back with a Vietnamese noodle bar in Redwood City
By Elena Kadvany | 7 comments | 3,510 views

You Can Help: Scents and Migraines
By Chandrama Anderson | 0 comments | 735 views