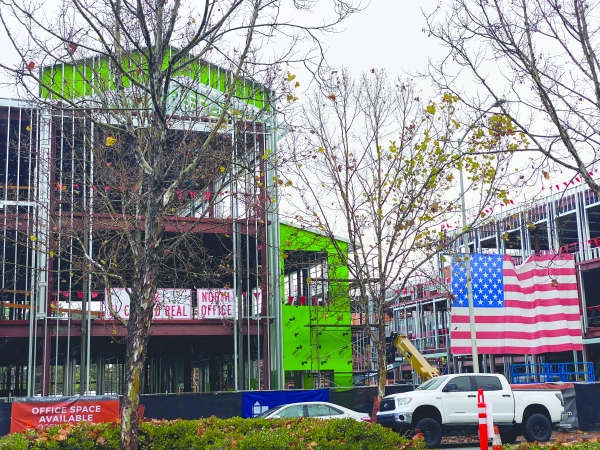 Construction continues at the Station 1300 site on El Camino Real at Oak Grove Avenue. The development includes retail and restaurant space, 183 apartments and about 200,000 square feet of office space. The office space is expected to be completed in the first quarter of 2020 and the apartments in the fourth quarter, according to the project website. (Photo by Sammy Dallal/The Almanac.) 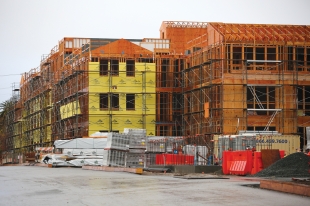 
This just makes me sick! Menlo Park is starting to look like San Francisco with all those multi-story buildings. Greedy commercial real estate people have taken over. They don't care in the least about the city of Menlo Park or its citizens. They care about one thing, and that's money!

I moved from Menlo Park 25 years ago, after living there for 50 years. What I don't understand is why the present MP City Council members aren't voted out of office. Are Planning Commission members appointed by the City Council, and Planning Dept employees hired from an applicant pool? If City Council members were of a different mind, perhaps Planning Commission members and Planning Dept employees would follow suit, and the city of Menlo Park wouldn't have taken the very sad turn that it has.today.


Still waiting to hear apologies from the council members who approved the last 10 year plan. Anyone remember their names?

Report Objectionable Content
Email Town Square Moderator
9 people like this
Posted by Mark L
a resident of Menlo Park: Central Menlo Park
on Dec 4, 2019 at 8:57 am

Menlo Park is hardly similar to other small cities in California. We've got Facebook and possibly the highest density of venture capitalists in the country. Comparisons based on size are silly.

This article is misleading. The auto dealerships on El Camino sat empty for many years. So instead of this development being spread out over a decade or more, it was all concentrated into the past 5 years. If you look at development over the past 20 years, it will be much less than Palo Alto or Redwood City.

George Fisher is a registered user.


I feel badly we couldn’t help residents understand and support measure M, which would have reduced office space 100,000 sf in landlocked area on Stanford project between Stanford Court hotel and big 5 with only vehicle access being El Camino, middle and Cambridge.

Measure M lost BIG. It lost big for a reason. Nobody was interested in your "sky is falling" nonsense.

Report Objectionable Content
Email Town Square Moderator
16 people like this
Posted by frugal
a resident of another community
on Dec 5, 2019 at 5:21 am


Menlo Voter: It seems to me "the sky has fallen".... at least over El Camino. BTW Measure M failed to pass because the developer over-spent the supporters by 10:1. And look where we are now.

Report Objectionable Content
Email Town Square Moderator
2 people like this
Posted by Menlo Voter.
a resident of Menlo Park: other
on Dec 5, 2019 at 3:12 pm


"BTW Measure M failed to pass because the developer over-spent the supporters by 10:1. "

Uh, no, it failed because the majority of the voters in this city were sick and tired of looking at vacant buildings and vacant lots. Further, they knew the city had spent years coming up with the DSP which allowed this construction. And they were fine with it. The only folks whining now are the "no birds" that were whining before.

Report Objectionable Content
Email Town Square Moderator
3 people like this
Posted by frugal
a resident of another community
on Dec 5, 2019 at 3:16 pm


Menlo Voter: "sick and tired"? You're right. Have you noticed the makeup of the new council?

"Uh, no, it failed because the majority of the voters in this city were sick and tired of looking at vacant buildings and vacant lots...."

You keep telling yourself that, @Menlo Builder. Truth is the FUD you, Peter, Dana and others spread about M's "unintended consequences" coupled with the developer spending imbalance already highlighted scuttled the measure. Now we're living with the actual consequences of the failure to pass Measure M, and those consequences will only worsen as the Stanford and Greenheart projects become occupied. Thank you for your ... service to the community, as always.

I and everyone else i know who supported M did so because it would have limited Office growth to the amount anticipated in the downtown plan.
They wanted rejuvenation consistent with the Plan. They supported growth of housing and other development that supports residents. Too much office does not.

Under the past city manager and council, Menlo Park was turned into a Jobs Center. The last election shifted to people who seem to care more about Menlo Park being a great residential community. Decision makers still need to address serious issues in the development rules that allow office growth to the detriment of residential quality of life.

Measure M lost because most MP owners aren’t NIMBYs and want to see a return for their investment. Menlo will keep growing, and if you don’t like find a small town somewhere.

Report Objectionable Content
Email Town Square Moderator
6 people like this
Posted by frugal
a resident of another community
on Dec 6, 2019 at 2:04 pm


Hey Progress, Totally agree that the developers deserve a decent return on their investment but should the neighbors suffer gridlock because a developer payed too much for his/her land? What do you think?

@ Progress
We want what the community Vision was and what the Plan described (balanced growth) not what has happened. - and still can. Ditch the labels. NIMBYism is not the same as opposing runaway office growth that brings hordes of commuters because there isn’t the housing or retail envisioned in the Plan. All forms of development could be profitable. We don't need more Offices here.

Report Objectionable Content
Email Town Square Moderator
2 people like this
Posted by Menlo Voter.
a resident of Menlo Park: other
on Dec 6, 2019 at 7:15 pm

you certainly give me a lot of credit for influencing people in this town. I don't think I have that much influence. As I said, people voted against M because they were tired of vacant lots and were fine with the years long process that created the DSP that allows the development that is going on.

The worst part was when the nefarious staff and Council somehow hypnotized the voters into voluntarily approving the massive Menlo Gateway office/hotel project in 2010! That controversial development that no one liked somehow squeaked by with [checks notes]... barely 64% of the vote?