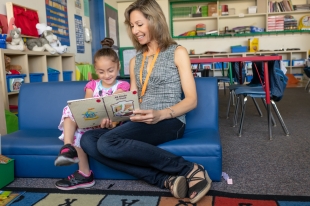 With changes in leadership, financial woes and school consolidations in the Ravenswood City School District, a local nonprofit is working to provide a sense of stability to district students.

Over the next year, All Students Matter, whose 200 volunteers already tutor students in grades TK-5 in East Palo Alto and eastern Menlo Park schools for a total of 270 hours a week, will expand programming and continue to support district teachers, families and students through the changes, said the nonprofit's new executive director, Angie Holman. Holman, a Menlo Park resident since 1997, took the reins at the nonprofit on Aug. 1.

With a looming budget deficit, the Ravenswood district announced that it planned to close two of its five elementary schools next fall: Willow Oaks Elementary School in Menlo Park and Brentwood Academy in East Palo Alto. The district's superintendent, Gloria Hernandez-Goff, was forced to resign earlier this year, and her job is being filled on an interim basis.

Under Holman's leadership, the nonprofit will expand its fifth grade mentoring book club this year from four to 10 classrooms and from eight to 12 weeks in spring 2020. The book club aims to help students improve their reading comprehension and also empower them with a resiliency "toolbox" to handle personal challenges, according to the organization's leaders.

In the Ravenswood district, about 65% of the students are English language learners, more than 90% are low income, and over 40% are in unstable housing or considered homeless, All Students Matter reports.

"When they come to school it is much more difficult for them to learn in English," Holman said. "Some face trauma at home, there are parents working multiple jobs, (or) they're living with multiple families in one house. It's a much more challenging set of circumstances that make it really hard for them to perform their best in school."

Holman, a Michigan native who studied engineering and comes from a corporate background, shifted her attention to volunteerism when she took time off to raise her kids. She started volunteering in their Menlo Park City School District schools, she said, but soon realized there was greater need at schools east of Highway 101.

"I got more and more passionate about trying to figure out how to make education more equitable and fair," she said. "My real belief is education needs to be more personal. Each student has unique needs, and some of those needs can only be met by one-on-one or small-group tutoring."

Holman noted that one-on-one work has proven to improve student success. For example, students performing below grade level in reading joined an intensive reading intervention program the nonprofit started last year and jumped ahead of their peers by 50% in their reading abilities, she said. The reading program includes one-on-one tutoring, five days a week for six weeks. She said it's much harder to measure the effects of the emotional support mentors have on students.

Eventually, Holman would like to grow the nonprofit's programs to include preschoolers and middle schoolers, she said.

Holman came into the executive director role after several years as a member of the All Students Matter leadership team. In fall 2018, she learned that the nonprofit's executive director at the time, Carolyn Blatman, planned to retire, and eagerly applied for the job. She was offered the job in February and worked with Blatman to transition into the role in June before officially taking over, Holman said.

"Angie Holman has the perfect blend of business skills and passion for educational equity that will make her an inspiring and effective leader for All Students Matter," said Jeanette Kennedy, chairman of the nonprofit's board, in a prepared statement. "Ms. Holman's leadership, program management, relationship building, and strategic planning experience will serve ASM well. Already she's guided our organization deftly as we ramped up an expansion of our literacy intervention support program and our 5th grade mentoring book club, which we offer in addition to our in-classroom support. She's building strong relationships with the district, principals, and teachers and we could not be more pleased with her leadership."

"I really enjoyed the focus (of All Students Matter) on literacy and trying to improve the academics of students who don't get a lot of support at home," she said. "A lot of students needed help in improving their confidence and motivation for lifelong learning."

For more information on the nonprofit, go here.

A Pragmatic Approach to A Trillion Trees
By Sherry Listgarten | 4 comments | 4,085 views

Singapore's oldest cafe was about to open in Palo Alto. Then, the coronavirus hit.
By Elena Kadvany | 2 comments | 3,679 views

Repairing a Disagreement with your Beloved & “Physical” vs. “Social” Distancing
By Chandrama Anderson | 2 comments | 2,754 views