The big screen comes to Atherton 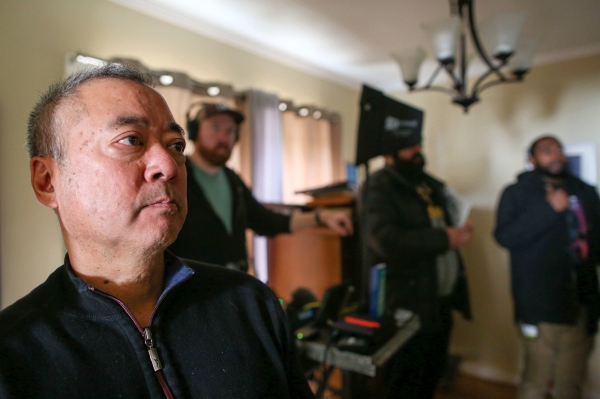 Atherton resident and Executive Producer Jeff Allard watches as a scene from "The Alternate" being filmed in Atherton on Dec. 18. (Sammy Dallal/The Almanac) 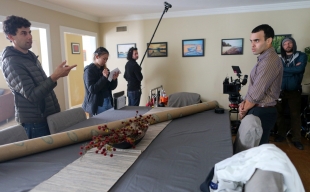 Cast and crew of the movie "The Alternate" discuss an upcoming scene in Atherton on Dec. 18. (Sammy Dallal/The Almanac)

It's not every day that you'll find a crew staked out at an Atherton home to film a movie, but that was the case last month.

"The Alternate," an indie film written and directed by Oakland resident Alrik Bursell, was filmed entirely on the Peninsula over 17 days in December, with filming for the most part wrapping up on Dec. 22. Shoot locations included two Atherton homes, a Menlo Park home, Taverna restaurant in Palo Alto and The Lariat Tavern in Belmont.

"The neighbors have been really wonderful and open to the idea (of the film)," Bursell said during the filming. "It provides a different look. Most things are shot in Atlanta and Vancouver (Canada). You don't see that many films shot in this part of the Bay Area."

The tie to the Peninsula comes from the film's lead producer, Jeff Allard, who also produced "The Texas Chainsaw Massacre," among other films. The movie was filmed at Allard's Atherton home and another producer's home in Atherton.

The film, which Bursell hopes to debut at film festivals this summer or fall, is a science fiction thriller about a man who discovers a portal to another dimension. There, he finds an alternative version of his life in which he has the filmmaking career of his dreams and a perfect wife.

He switches places with this other version of himself, but comes to realize that this other life isn't so perfect.

Bursell, who graduated from San Francisco State University with a bachelor's degree in radio and television, has written seven short films, but this is his first feature film. He began working on a draft for it in March 2014, and underwent a long process of refining the script, raising funds and gathering a team after that.

"Seeing the scenes I had written and been thinking about for many years exist on digital film is crazy," he said. "The actors are perfect in the roles. I cried on set one day because it was exactly as I imagined. It's like living the dream that's been in my head for so many years."

"It has been really special to shoot here in Atherton," he said. "Trying to make a feature film is something I've been working toward for 10 years."

For more on the film, go to here.

A Pragmatic Approach to A Trillion Trees
By Sherry Listgarten | 4 comments | 4,084 views

Singapore's oldest cafe was about to open in Palo Alto. Then, the coronavirus hit.
By Elena Kadvany | 2 comments | 3,626 views

Repairing a Disagreement with your Beloved & “Physical” vs. “Social” Distancing
By Chandrama Anderson | 2 comments | 2,750 views