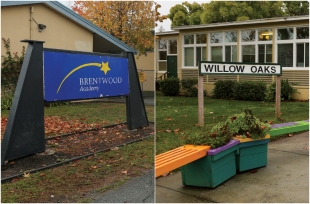 The Los Robles-Ronald McNair Academy will remain intact, including its dual-immersion program. There will be no change to Ravenswood Middle School.

The board unanimously supported the Willow Oaks-Belle Haven merger but the Brentwood-Costaño consolidation initially failed in a split vote. Trustees Stephanie Fitch and Tamara Sobomehin supported it, Vice President Sharifa Wilson and Gaona-Mendoza did not and President Ana Maria Pulido abstained.

After the deadlock, however, Pulido changed her vote in favor of the merger and it passed in a 3-2 vote. She said that while she disagrees with moving Brentwood, the facilities at Costaño are of higher quality and worth maintaining.

The board's final action aligned with staff's recommendation, though it was unclear throughout most of the meeting whether there would be sufficient support among the trustees for that plan. They discussed other scenarios, including moving Costaño to Brentwood, Willow Oaks to Belle Haven and Brentwood to Los Robles-McNair. They debated the impact on students' access to neighborhood schools, transportation and safety concerns; the ability for teachers to collaborate at smaller sites; and the potential for rental revenue from different sites, among other issues.

The K-8 district began discussing school closures in earnest this year in the face of declining enrollment and budget cuts. All of Ravenswood's elementary schools are operating at close to half capacity this year, and the district's overall enrollment is just over 2,000 students.

The district is aiming to cut $1.35 million from next year's budget. Closing a single school represents cost savings of about $400,000.

The district solicited public feedback on school mergers this fall through community meetings, district office hours and an online survey.

Interim Superintendent Gina Sudaria said previously that the final recommendation, announced in early December, took into consideration four priorities identified by community members and board members through the input-gathering process: location of schools, including keeping neighborhood schools and ensuring the three remaining schools are spread out so more students have a school nearby; minimizing the number of students impacted; considering the facility's size and condition; and protecting special programs such as dual-immersion, arts and mental health support.

Other advantages to this consolidation plan, she noted in a past presentation, are that Ravenswood can keep a school in Menlo Park, avoid further disruption for Los Robles students who recently moved to the McNair site, minimize the use of portable buildings and ensure there are enough classrooms for all projected students, with room to grow in the future.

Any students who are new to the district next fall will be able to choose which elementary school to attend.

Staff at the affected schools will generally move with students, though principals, office staff and potentially custodians will be cut, according to the original staff proposal. Classified staff who will be affected will be notified in February.

The district is contractually required to distribute by this Friday, Jan. 10, forms for teachers to indicate whether they plan to come back to Ravenswood in the fall and if so, which schools and grade levels they prefer.

The district plans to explore leasing the Brentwood and Willow Oaks campuses to bring in additional revenue, and to address an expansion request from KIPP charter school in East Palo Alto.

To Whatever,
No way! That one has already been sold to Facebook (Primay School). Wait and see.

Menlo Park City School District should buy or rent the Willow Oaks campus, as a hedge against increased enrollment in the future. They could even consider building a new school there to replace the newly built Upper Laurel school and renting out the existing school. The new site would be closer to the Lower Laurel school, essentially a straight shot down Coleman Ave. Would avoid winding through the Willows neighborhood to get to Upper Laurel.

Where will these kids now be sent to school?

Report Objectionable Content
Email Town Square Moderator
12 people like this
Posted by Jennifer Bestor
a resident of Menlo Park: Allied Arts/Stanford Park
on Feb 1, 2020 at 10:29 am

The San Mateo County Controller just posted his 2018-19 Property Tax Highlights report. It shows that property tax collected for low-income school districts in the county, but redistributed to other local agencies as "excess" to school needs, grew from $210 million to $243 million.

So Ravenswood is having to close two community schools to save $0.4 million each, while $243 million is dismissed as unneeded.

What would it take to change this? 200 words in the state Education Code, adding a regional cost supplement to the school funding formula. No new taxes. No ballot initiative. Just a majority vote in the legislature.

Just for Ravenswood? No -- for every low-income school district in the four very high-cost counties: San Mateo (incl. Redwood City, Half Moon Bay, Daly City), Santa Clara, Marin and San Francisco. Which would cost nothing? Yup ... between these four counties, there is now over $900 million a year of property tax collected for education that is being dismissed as "excess."

Meanwhile, Gov. Newsom is advocating for "community schools" in his budget ... while Redwood City and Ravenswood are closing theirs. Not for lack of money. Just for lack of political will.

"What would it take to change this? 200 words in the state Education Code, adding a regional cost supplement to the school funding formula. No new taxes. No ballot initiative. Just a majority vote in the legislature."

While Jennifer and I have historically disagreed on funding issues as they relate to MPCSD, I can say I wholeheartedly agree with her point on this matter.

The poor apportionment of property tax funds as designed by Assembly Bill 8 (AB8) is ultimately at the root of this problem. As Jennifer has alluded to in previous posts over the years, ERAF is meant to partially mitigate the funding distribution problems created by AB8; but even ERAF is flawed by not providing more funding to poor districts in high cost-of-living areas.

IMHO AB8 needs to be completely replaced with a better apportionment method. But in the interim the under-funding of poor schools can be mitigated by simply adding a regional COLA to the redistribution of funds in ERAF.

Report Objectionable Content
Email Town Square Moderator
6 people like this
Posted by Peter Carpenter
a resident of Menlo Park: Park Forest
on Feb 2, 2020 at 7:23 am

I agree that it is time to totally revise the allocation of property taxes that was established over 40 years ago by AB 8.

Doing so will require a lot of difficult choices since this would be the ultimate zero sum game - any increases to one entity would require reductions to other entities.

One possible method would be modeled after the current process of redistricting which was based on the work of a non-partizan citizens panel. Recommendations from such a panel could then be submitted to either the legislature or the voters for a simple yes/no vote without the opportunity to tinker.

A more feasible local solution would be to consolidate all fire and police agencies in San Mateo County and then allocate the hundreds of millions in savings to the schools. We would get better fire and police services and better schools!


(PS - the worst method would be to do it piecemeal by a Town Council which represents a tiny, tiny, tiny number of taxpayers.)

A Pragmatic Approach to A Trillion Trees
By Sherry Listgarten | 2 comments | 3,594 views

The University of California’s flexible policies during COVID-19
By John Raftrey and Lori McCormick | 6 comments | 2,448 views