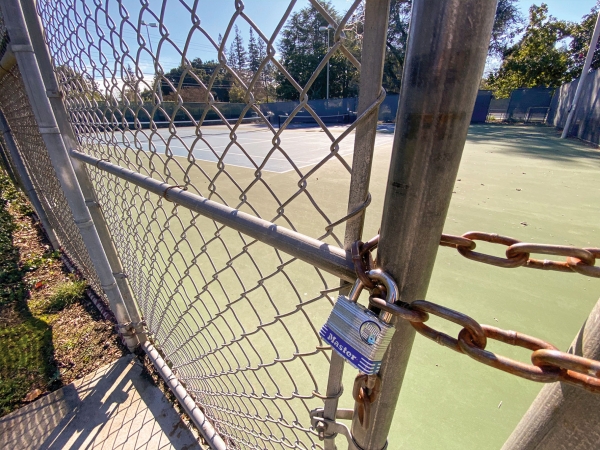 Public tennis courts photographed in Nealon Park in Menlo Park were locked on Jan. 10. The city of Menlo Park is going to review its policy on requiring keys to access "public" tennis courts. (Photo by Sammy Dallal/The Almanac.) 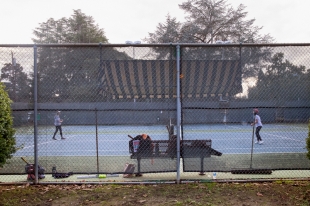 Athletes use the tennis courts at Nealon Park in Menlo Park on Jan. 9. (Photo by Magali Gauthier/The Almanac.)

Menlo Park, unlike many neighboring cities (with the exception of Atherton), keeps its public tennis courts under lock and key. It's a holdover from a bygone era, Community Services Director Derek Schweigart explained.

Today in Menlo Park, people must purchase a key if they want to access any of the city's 15 tennis courts. Key rates are $63 a year for residents and $127 for nonresidents. Last year the city sold 530 keys, 81% of which were sold to city residents, 11% to unincorporated residents (who are considered nonresidents) and 7% to those who live in another city. The city also offers lower rates to rent a key for a day, and half-year key rates.

In addition to the key rates, to reserve a tennis court, residents pay $17 an hour, and nonresidents pay $22 an hour, rates that are comparable in cost to neighboring cities.

But the key system may be up for evaluation. Schweigart said that he's hoping to work with staff over the coming months to survey the tennis community and ask residents how they feel about the program. He also hopes to learn about residents' interest in the growing sport of pickleball, which uses tennis-sized courts but has different striping marked on them, he added.

"We know in Menlo Park we have a very vibrant tennis community, and people have high expectations for maintenance of courts," he said.

He noted that he hasn't heard complaints about the keys.

"I think that those who are participating in the program may find that it's a good value," he said.

The key system comes from a policy established around 2007 aimed at helping the city better recover costs from individuals who access some city services, Schweigart said. Every year, the city approves a master fee schedule, based on a cost recovery study the most recent study was done in 2018. It reports that the City Council favors "mid-cost recovery" or recovery of 30% to 70% of the total cost, for tennis court usage in the city.

The key program, Schweigart said, helps to offset the costs related to maintaining the courts. Nets must be fixed, paint redone, lightbulbs replaced and surfaces power-washed.

The city dedicates half of an employee's salary to tennis court maintenance and maintains a capital improvement program for the courts, he added; the key program and court maintenance take up about 930 hours of staff time a year. The key system also helps ensure that the courts are used for tennis as opposed to, say, a convenient enclosure to exercise dogs, he said.

Schweigart said issues of whether kids, teens or lower-income residents had trouble accessing the courts because of the key requirement had not come to his attention, but he noted that the Kelly Park tennis courts, which are in Belle Haven, the city's neighborhood with the largest number of lower-income residents, is less popular than other tennis courts even though the courts themselves are newer and in good condition.

Damn, back when I was growing up in Menlo Park, it was free. This was the way kids and adults used the courts for recreation. That was the 70s, 80s and 90s. Now it is all about the Benjamins. Sad, a bygone era. Menlo Park garners enough in taxes to be charging these rates or anything, for that matter. Money grubbing group.

That's ridiculous. Menlo Park should just charge its residents a service fee just to live there. Similar to HOA fees for housing associations, Menlo Park could become one huge exclusive community that only allows those wealthy enough to afford to pay the service fee which would be on top of sales tax, school taxes, property tax and other fees/taxes it already assesses. MP could raise money, make it all pretty, drive out low-income residents and have an idyllic life in the country club seeting. In all seriousness, there must be another way to fund the court maintenance and still make available for all the residents the use of the courts.

A Pragmatic Approach to A Trillion Trees
By Sherry Listgarten | 2 comments | 3,596 views

The University of California’s flexible policies during COVID-19
By John Raftrey and Lori McCormick | 6 comments | 2,450 views