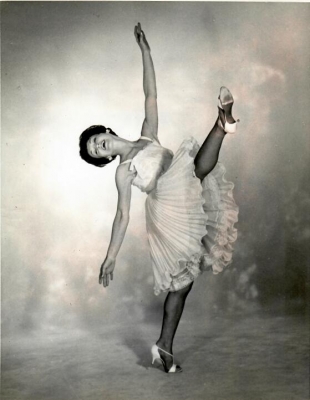 RoseAnn Sayler, founder of the Menlo Park Academy of Dance, died on Jan. 5 at age 96. Photo courtesy of her family.

I am a 78-year-old Menlo Park native. My sister and I took baton and acrobat lessons for years at RoseAnn's Dance Studio. We twirled our batons every year in the Palo Alto May Day Parade. RoseAnn was a wonderful teacher. Always encouraging her students with a smile. I will send RoseAnn's family a note, letting them know my sister and I were students of hers many years ago.

Took ballet classes from her in the late ‘50’s !
RIP RoseAnn

What an amazing woman she was! I took jazz classes at RoseAnn's in the late '70s, and one would see her around the studio, observing everyone and offering encouragement. She was in her late 50's at that time and yet had more energy than all of us kids put together!
As these Menlo Park legends leave us, it makes me appreciate the beautiful ripple effect they have produced, touching countless lives and creating memories sustained by all who knew them.

RoseAnn introduced dance with her high energy and beautiful smile. My mom did not tell me I was going to my first dance class until we got there. I was upset at first but then was ok with it.
RoseAnn wanted her students to strive to be the best people, best dancers, and spread the happiness of dance and music. Memories of RoseAnn will live on and keep us dancing.