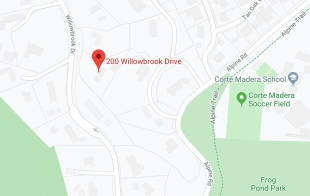 The San Mateo County Sheriff's Office arrested a 17-year-old robbery suspect after he or she allegedly demanded money and property and simulated a weapon on the 200 block of Willowbrook Drive in Portola Valley after midnight on Jan. 19. (Image via Google Maps.)