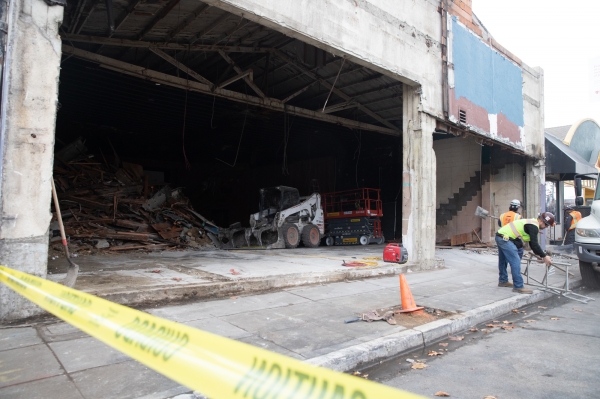 The demolished interior of the Guild Theatre, as seen from El Camino Real in Menlo Park on Dec. 12. (Photo by Magali Gauthier/The Almanac)

Absurd. Let them do the work between 11pm and 6am. The developer can pay the higher rates so we don't have to pay with our inconvenience for his profit.

It is absurd. This inconveniences THOUSANDS of drivers on the only north-south arterial road on Peninsula. Of course, some drivers will just cut through the residential sections of Menlo Park to avoid this. Maybe local residents can let their city official know how it works out.

The contractors have full time access to one lane of ECR plus there is a highly unused alley at the rear of the site - why do they need a third lane?

"The contractors have full time access to one lane of ECR plus there is a highly unused alley at the rear of the site - why do they need a third lane?"

Simple answer. They don't. I have done construction work on some extremely tight construction projects. In my opinion this site does not warrant closing a lane on ECR. They have the curb lane. The jobs up the street have been fine with only having the curb lane and neither has a rear alley way. This needs to be figured out so that a lane is not closed or if it is absolutely unavoidable, it should be done in the middle of the night.

Report Objectionable Content
Email Town Square Moderator
4 people like this
Posted by Soccer mom
a resident of Menlo Park: other
on Jan 22, 2020 at 11:08 am

The "highly unused alley" is a parking lot for all the businesses on that block.