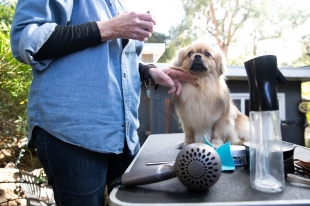 Diana Gerba pauses while grooming Marco, a 4-year-old Tibetan spaniel, at her home in Menlo Park on Jan. 30. Photo by Magali Gauthier/The Almanac.