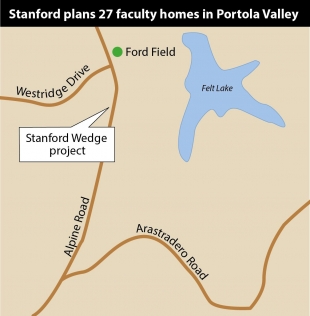 The Stanford Wedge project is planned for a flat portion of Stanford-owned property near the intersection of Westridge Drive and Alpine Road.

The Stanford "Wedge" housing plan would also create additional chaos along Alpine Road PLUS make emergency response times increase because of the virtual gridlock along Alpine Road/Alameda/Santa Cruz/Junipero Serra. Stanford needs to provide housing on the central campus, not in the surrounding jurisdictions, which places a huge burden on those jurisdictions.

Spot on Janet. Fire concern and problematic mitigation too important to allow a housing project better suited for the central Stanford campus. No benefit to anyone least of all Portola Valley. The PV Town Council needs to exert some influence to shut down this dangerous overreaching boondoggle.

Seems to me that another 40 homes having access to Alpine road is a drop in the bucket. Compared to the 4000 or so homes already having access? These cars would be going in and out during various times of the day. Seems like yet another case of “we need more housing—just don’t do it anywhere near me”

Awesome example of "not in my neighborhood" thinking - no consideration of benefits of having more kids to help fund the schools, some needed diversity, improved local partnership with Stanford etc.. This is the "land version" of fighting over those annoying planes that help drive the Bay Area economy. #PVprivilege at work

Readers need some ‘illuminating’ insofar as Stanford is a non-profit and would be contributing ZERO tax dollars to the PV school system but, rather, getting a ‘free ride’ on the backs of PV residents. Stanford needs to consider housing in their ‘own backyard’ (on campus) and educate their faculty children accordingly. Traffic is the ‘camel’s nose under the tent’! The fire concerns are real and to argue about other issues is nonsensical.

The real problem with this development is that it is restricted to occupancy by Stanford faculty. No other neighborhoods in Portola Valley have occupancy requirements. This goes against the grain of what Portola Valley is all about and should be rejected unless it occupancy to open to everyone.

The Sequoias is not open to everyone. Why should Stanford land be? Bad argument, @Member

If Stanford owns it, then Stanford pays no property taxes. It is a free-ride for Stanford and PV picks up the extra costs to supply schools, roads, fire and police.

I'm fairly sure there is enough land in the central campus area - particularly as they are pushing for a MAJOR increase in their General Use Plan.

Report Objectionable Content
Email Town Square Moderator
13 people like this
Posted by @FreeRide
a resident of Woodside: Woodside Hills
on Feb 12, 2020 at 9:13 pm

Report Objectionable Content
Email Town Square Moderator
7 people like this
Posted by Bob
a resident of Portola Valley: Central Portola Valley
on Feb 13, 2020 at 11:15 am

Stanford has strict limits on the square footage it is allowed to add to campus in Santa Clara County. This wedge in PV would be exempt from that since its in SM County- thats why they are pushing it. See below for an interesting article (somewhat out of date!) on how SC County deals with them:

Dear “West Menlo”:
Note that there are NOT currently 4000 homes in Portola Valley. Rather, there are 4500 residents. So adding 40 more with perhaps 70-80 more cars would indeed make a difference on our narrow two lane roads that also carry many many bicyclists. We live in fear of the gridlock that is currently anticipated if ever an earthquake or fire struck.

“This goes against the grain of what PV is all about.”

What exactly is that? Expensive homes, high fences and security cams on the roads.

At least be honest that you just don’t want change and are afraid of anything that could upset your/our idyllic lives.

Report Objectionable Content
Email Town Square Moderator
26 people like this
Posted by Enough is too much
a resident of Portola Valley: other
on Feb 13, 2020 at 7:07 pm

West Menlo - if you want more housing in your neighborhood then go for it. Us up on the hill are happy they way things are. That's right, we don't want the Menlo Park or Palo Alto type of change where roads are clogged, the wildlife has been decimated, the air is filthy, the people are snarky and the houses are stacked one on top of the other.

Menlo Park and Palo Alto have been destroyed. If only someone 20 years ago would have said "not in my back yard" your towns would be livable, not laughable.

John - if you really do live on Mt. Home then who are you to throw stones? Look at what Larry did to Mt. Home, and the massive mansions that followed. Talk about expensive homes and high fences, but I'm guessing you don't really live there, you only wish you do.

Now, if anyone has really read the article you'd see that the main issue here is fire danger. Read what the Fire Marshall has reported: it would be terribly irresponsible if not down right negligent of Stanford and the Town Council to approve this project. End of story. Call us what you want, but I don't want my neighborhood to burn down because Stanford wants to house a few professors.

Report Objectionable Content
Email Town Square Moderator
16 people like this
Posted by Land grab
a resident of Portola Valley: Central Portola Valley
on Feb 14, 2020 at 9:28 am

The timing of this is no coincidence—Santa Clara county said no to Stanford’s ridiculous plan so they’re trying to find alternatives. Let me remind those commenting who aren’t from PV that our town is FAR different from other towns like menlo, we only have three ways in and out and fire danger is incredibly high. We as residents are uniformly united against this proposal because of this big development that would create a huge safety hazard. Why doesn’t MENLO and PALO ALTO do their share because after all they’re closer to Stanford then we are... hypocrites.

@land grab: Menlo Park is doing a pretty good job with Stanford in light of their building along El Camino where all the car dealerships used to be. Both office space and residential. Lots of it.

Where are the NIMBYs from PV when the millionaires and billionaires build their huge developments in Los Trancos? And PV can’t build and absorb 27 houses and 12 apartments? You are that overcrowded? Sorry—-not buying it.

Report Objectionable Content
Email Town Square Moderator
9 people like this
Posted by a PV resident
a resident of Portola Valley: other
on Feb 15, 2020 at 9:06 am