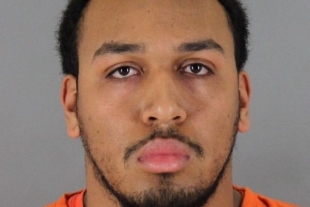 Tyrone Love-Lopez, 27, was sentenced on Feb. 18 to eight years in prison for the killings of Lamont Coleman and Jonathan Alcazar in East Palo Alto. Photo courtesy of the San Mateo County District Attorney's Office Bureau of Investigation.

Following an extensive investigation of rival gangs who committed violent acts in East Palo Alto and Menlo Park, many of the 16 people indicted were sentenced to life in prison.

"It's a Sunny Day" was the code the gang members used to indicate they had made a successful hit on a victim.

Tyrone Sostenes Love-Lopez, 27, of East Palo Alto, who was the last to be sentenced, pleaded no contest to voluntary manslaughter in the shooting death of Jonathan Alcazar in January 2013 and admitted to a felony charge of assault with a semi-automatic firearm and a "serious felony" allegation under the state's "strikes" law in the March 2013 shooting of Ramon Soria.

Love-Lopez avoided a second trial on the charges by taking the plea deal. On May 24, 2018, a jury deadlocked after a 31-day trial and five days of deliberations. They found Love-Lopez not guilty of the first-degree murder of Lamont Coleman and deadlocked on the remaining charges: conspiracy to murder Alcazar; the murder of Alcazar; three counts of felony assault with a semi-automatic firearm on Ramon Soria, Adrian Soria and Daniel Larios; and one count of conspiracy to murder Coleman. Judge Lisa Novak declared a mistrial.

On Tuesday, Novak gave Love-Lopez nearly six years of credit off his sentence for time served plus 324 days of credit for good behavior. He must pay $10,000 to a state restitution fund, in addition to other fines and fees. The case will return to court on March 30 for a restitution hearing to determine how much he owes to Soria and the family of Alcazar. Love-Lopez has been in custody on no-bail status and was immediately transported to prison.

All 16 people who were indicted have been convicted and sentenced to state prison for varying lengths of time, many for life without parole. Another eight people were also prosecuted, convicted and sentenced for assisting in the coverup of the crimes through perjury, lying to law enforcement officers and making threats to witnesses, Wagstaffe said.

These local restaurants are donating meals to Bay Area residents in need. Here's how to help.
By Elena Kadvany | 6 comments | 10,851 views

Coronavirus: Plan ahead now for a big outbreak
By Diana Diamond | 18 comments | 3,930 views

Will the Coronavirus Save Lives?
By Sherry Listgarten | 29 comments | 3,745 views