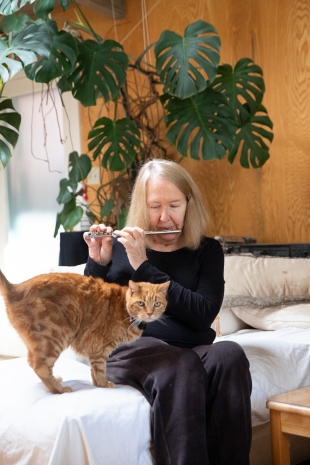 Cindy Costell, a member of the Los Trancos Woods Marching Band, plays the piccolo to her cat, Chloe, in the home they share in Palo Alto. Photo by Magali Gauthier/The Almanac.

Musical tastes come and go, but the Los Trancos Woods Community Marching Band is a throwback, a madcap troupe that has been playing the same music for 60 years and enjoying it just as much as when it started.

In fact, the Los Trancos band, which boasts a group of about 150 part-time and full-time members representing an even-less-formal version of the Stanford University Marching Band, formed spontaneously on Jan. 1, 1960, in Portola Valley's Los Trancos Woods neighborhood from which it took its name.

An ad hoc indoor orchestra made up mostly of Stanford students and recent Stanford graduates had played a New Year's Eve party and then spent the night at the site, according to Menlo Park resident Jim Harvey, one of the original members.

"When the sun came up the next day, it was bright and sunny and someone suggested that we go outside and get some fresh air," Harvey said.

The great outdoors had an invigorating effect.

"We marched around the top of Los Trancos Circle playing our instruments, and we've been marching ever since," he said.

The band is made up mostly of players of traditional band instruments, not counting a washboard and a kazoo or two, or whatever suits the band members' fancy.

The musical selection errs on the side of being unashamedly cornball: "California, Here I Come," "How Much is That Doggie in the Window," and "The Mickey Mouse Club March" are in the band's repertoire, along with a host of other staples.

The band performs annually at several big parades and events in the Bay Area, including the St. Patrick's Day and Italian Heritage Day parades in San Francisco, the Fourth of July Parade in Redwood City, and the May Day Parade in Woodside.

Regardless of when and where the band plays, it's always a party, with a cart bearing beer often following along behind.

Harvey's favorite memory is connected to a Ferris wheel that the band discovered at an event in Rio Vista on the Sacramento River Delta. After a little negotiating with the operator, the band members held an impromptu performance while riding on the wheel.

La Honda used to be a favorite destination, but that ended in the mid-1960s when the rural outpost became a favorite spot for the Hells Angels and other motorcycle clubs who "kind of ruined it," Harvey explained.

"La Honda Days (a defunct annual festival of music and community celebration) used to have a banana slug race where you could enter your own slug and root it on, and it would take about a half-hour to get a winner," he said.

Harvey and bass drummer Don Nelson, also known as "Smiley" to band members, go way back. They were roommates as Stanford students and for a time after college. Nelson joined the band in 1961 after a stint in the Army, and estimates that he has played at least 500 events over the years.

His favorite event is the Fourth of July Parade in Redwood City, which the band has marched in continuously since 1964.

"I'm the one who writes the newsletter and puts the beer in the cart," Nelson said. "I play the bass drum in the band, and now I push it on a cart, too. I should have taken up the flute, probably."

"We play anything anybody asks us to play as long as it's not modern," he added.

Speaking of beer, Nelson said he's into extracurricular activities beyond the band and is proud of the fact that he was named "King of Rossotti's," also known as the Alpine Inn, in 1980.

He remembers his first time at the Portola Valley watering hole as an 18-year-old Stanford freshman.

"They gave me a quart of Olympia beer and told me, 'This is the last one on the house,'" Nelson said. "They couldn't care less how old you were in those days."

There were some characters who stood out even in the midst of a flock of characters, including Ronald Bennett, who for a time showed up wearing a diaper, which he said came from the need to shed clothes to beat the heat.

"It sometimes got so hot, so I thought the best thing I could do was wear the diaper," said Bennett, who performed in the band, not always in the diaper, from 1984 to 2000. "It was the most comfortable thing I ever wore."

In his day job, Bennett ran a dental lab that made false teeth and exercised his political chops by running unsuccessfully for the Palo Alto City Council a couple of times.

He played a wooden flute and still calls himself Ptah Siki after the Egyptian deity of artists and craftsmen. He had several other outfits, one of which had four heads, and another that he designed to imitate Psyche, the Greek goddess of the soul, he said.

Cindy Costell, a retired Palo Alto Unified School District teacher, said she was recruited at a banquet held before the Big Game between Stanford and University of California at Berkeley football teams in 1974.

Six months later there was a "tryout," which really wasn't a tryout since anyone can join, Costell said.

"I showed up on time, which was a mistake, and a couple of the guys that were there gave me a hard time," she said. "They looked me up and down really seriously, and it was like 'Where have you rehearsed and practiced for this?' When it turned out it was all a joke there was a lot of backslapping and a lot of laughing."

The band also has a "rehearsal" once a year, a number of which have been held at Costell's house in Palo Alto, she said.

"We play the same songs and march up and down the street and terrorize the neighbors and all the neighborhood pets," she said.

One of Costell's most vivid memories is of the time the band "crashed" the Condor Club, the then-infamous topless club in San Francisco's North Beach district, playing a rousing rendition of "Onward Christian Soldiers" on the street before transitioning to "Walk Right In" after going inside.

"Back in the day we did a lot more pranks than we do these days," Costell said. "We'd ride up to San Francisco on the train, drink champagne and serenade a particular car."

Then there was the Tidy Bowl, an annual Thanksgiving Day touch football game with a "pregame warmup and a halftime musical spectacular" at the athletic field next to Rossotti's.

Costell wasn't specific about the circumstances but said that "Portola Valley made it clear that it didn't want the Tidy Bowl playing next to (Rossotti's) anymore," she said.

Costell said that the band is always looking for new members, and the ability to play a recognized musical instrument is not a prerequisite.

Members are always looking for something new, and the more variety the better, she said.

"We've had violins, guitars and banjos. We've had people on roller skates and jugglers. We have kazoos and noisemakers, but we don't have a cowbell," Costell said.

For more information on the band, visit ltwcmb.com.

I had the fortune of running into this band 40 years ago. It has been a wonderful and exciting series of fun events. Thank you Los Trancos Woods Community Marching Band for all the memories.

These local restaurants are donating meals to Bay Area residents in need. Here's how to help.
By Elena Kadvany | 6 comments | 10,845 views

Coronavirus: Plan ahead now for a big outbreak
By Diana Diamond | 18 comments | 3,920 views

Will the Coronavirus Save Lives?
By Sherry Listgarten | 29 comments | 3,740 views