Carl Jones, Laurel School's man of many hats, dies at 62 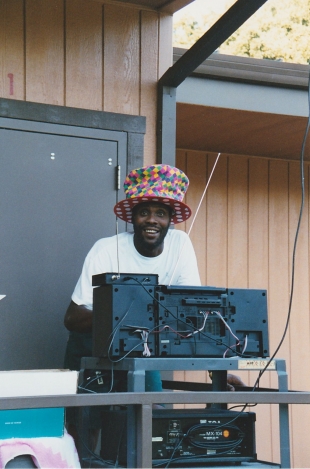 Carl Jones' favorite holiday was Valentine's Day, so that's the day that his family chose for his memorial gathering, friends and former colleagues at Laurel School said in an announcement.

The longtime Laurel School custodian and crossing guard, who delighted kids and staff at the Atherton school with his flair for hats, died on July 7, 2019, at the age of 62.

Jones, who lived in Half Moon Bay, worked for the school for 15 years before he retired in 2009.

He grew up in Chicago, the oldest of six children, Jones told The Almanac in a 2001 interview. After moving to California from Minnesota in 1990, he worked in construction.

In an unusual career trajectory, Jones helped build Mountain Mike's Pizza & Pasta in Redwood City, then was asked to stay on as a cook when the building was completed. He eventually became the restaurant's manager before leaving to work on construction projects in the Burlingame Elementary School District.

Jones began working at Laurel in 1994, according to the district.

"Carl was most noted for his charismatic personality and the wearing of many fun and different hats, while performing his duties as a crossing guard at Ringwood and Edge roads," according to the school's memorial announcement. "He was a wonderful person who will forever live on in our memories."

Jones started wearing a tall, red and black Dr. Seuss hat for his crossing guard duties because he wanted to make sure motorists would see him and the children, according to a past Almanac article. His collection of outlandish hats, from wizard to cowboy to Cat-in-the-Hat, swelled to over 100, and were stored in the school's multi-use room.

Outside of his regular school duties, Jones donated a barbecued rib dinner to the Menlo Park-Atherton Education Foundation's annual auction that, over the years, generated about $100,000 for the school community, said Shari Conrad, a member of the foundation in 2009. He shared his cooking skills with Laurel staff – making them "delicious, tender spareribs," school staff said.

Jones told The Almanac in 2001 that his interest in cooking grew from watching his mom, a single parent, cook.

According to the school announcement, Jones appeared on the program "Dirty Jobs," a TV series on the Discovery Channel hosted by Mike Rowe, featuring working people with difficult or messy jobs.

Jones is survived by his partner of 31 years, Fran Corbit, his mother Mary Moore Madison, and his siblings.

The Feb. 14 memorial was held at Skylawn Memorial Park in San Mateo. In lieu of flowers, his family requests that donations be made to the Nine Lives Foundation in Redwood City, a nonprofit cat rescue organization.

I have never met Carl Jones (our kids went to MPCSD schools during those years/not Laurel) but it sounds like the district and our kids were very fortunate to have the gift of Carl. His life was a lot more colorful than most! Thank you Carl and, to his family, I suspect you miss him dearly and I am hoping you find comfort in the community and your close friends.

We don’t live in Menlo Park anymore but we lived across the street from Laurel School during my kids’ elementary school years. I always felt safe when my kindergarten child crossed the street to get to school when Carl was there. And since both of us were from Chicago originally we shared a lot of Chicago stories. Our sincere condolences to Fran and his family

These local restaurants are donating meals to Bay Area residents in need. Here's how to help.
By Elena Kadvany | 6 comments | 10,827 views

Coronavirus: Plan ahead now for a big outbreak
By Diana Diamond | 18 comments | 3,907 views