'This is a miracle': Missing Palo Alto couple found alive, ending weeklong search in which hopes had dimmed 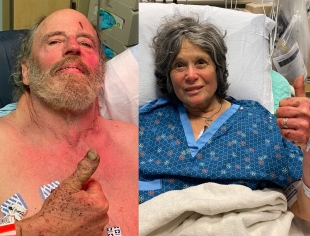 In an outcome that's being called a "miracle," search and rescue volunteers navigating their way through dense vegetation on Saturday found Palo Alto residents Carol Kiparsky and Ian Irwin about 3 to 4 miles away from their vacation cottage in Marin County, from which they had gone missing eight days earlier.

The couple, who were conscious, cold and without food or water, were dressed in "light evening" attire and without jackets, Sgt. Brenton Schneider of the Marin County Sheriff's Office said at a press conference outside the Inverness Volunteer Fire Department on Saturday afternoon.

"This is a miracle," Schneider said while standing in front of a phalanx of happy search and rescue volunteers, who with personnel from law enforcement, fire and state park agencies looked for seven days for the couple.

The sheriff's office was first notified of the discovery around 10:10 a.m., when search volunteers reported Kiparsky, 77, and Irwin, 72, were "alive and well" in a densely overgrown area near Inverness, Schneider said.

The team of volunteers helping the sheriff's office in the search were canvassing a new area that had yet to be searched when they heard yells and found the couple in a drainage ditch.

Marin Search and Rescue volunteer Quincy Webster immediately took off all his gear and provided the couple with warmth and water so they could have enough energy for the helicopter ride away from the scene.

Webster recalled how grateful the couple were when he spoke to them: "Thank God you found us. We’re so happy," they had said to him.

He was assisted by volunteer Rich Cassens and Groot, a 3-year-old golden retriever from the California Rescue Dog Association.

The couple had gone for a hike from their cottage on Friday, Feb. 14, but said they got lost in the dark. At some point they fell down but continued on their journey. They wound up stuck in the woods, Schneider said.

Kiparksy attempted to find help and tied her scarf around branches to trace her way back to Irwin, but she was unable to make it out of the area due to thick vegetation.

She was found with no shoes on, Schneider said.

"They thought this was the end for them," he said.

Kiparsky and Irwin survived the past week by drinking water from a nearby puddle, according to Schneider. They were suffering from mild hypothermia, he said.

The Henry 1 helicopter team from the Sonoma County Sheriff's Office arrived to take the couple away from the scene. By about noon, the couple were extracted and being transported to a hospital, according to the sheriff's office. Irwin remained in high spirits, at one point singing a song as the helicopter arrived (Watch a video of the rescue by the Henry 1 team here.)

Kiparsky, 77, and Irwin, 72, were last heard from on Feb. 14. They were staying in Inverness, a small community about 3.5 miles northwest of Point Reyes Station, according to the sheriff's office. They were due to check out the following day and missed an appointment last Sunday.

Deputies concluded there was no suspicion of foul play based on their search of the cottage, which was rented through Airbnb, according to Schneider.

Since Feb. 15, searchers canvassed the area by ground, air and water in Tomales Bay with help from agencies and volunteers throughout the Bay Area.

The couple were known to take frequent vacations to Inverness and were familiar with trails in the area, Schneider said. Family members described them as "avid hikers" who were practical about their outdoor excursions because Irwin had injured his ankle and leaned toward taking short hikes.

"Literally, we just got a message to us right before it went on Twitter," said a relieved Cheryl Irwin, wife of Jonas Irwin, whose father is Ian Irwin and whose stepmother is Kiparsky. "We've been given little information because they're focused on extraction."

Jonas Irwin was on his way to pick up his stepbrother, Jonathan Kiparksy, on Saturday following the news, according to Cheryl Irwin.

The discovery of the pair came after days of fruitless searching, which prompted the Marin County Sheriff's Office to declare the search and rescue operation as a "recovery mission" on Thursday.

"The question has come up about us calling this a recovery mission as opposed to a search and rescue mission," Schneider said. "Regardless of what we call the mission the people that you see standing behind me still do what they do. They get out there and they search whether it's for someone who's alive, or who is not alive."

The sheriff's office had resumed its search operation at 8 a.m. Saturday with K9 teams, drones, mounted posse units, boat crews and airplane crews. The agency had search plans in place through Monday, when they would've re-evaluated next steps, Schneider said.

Over the past week, hundreds of volunteers assisted the sheriff’s office in its efforts to find the couple. The search spanned 10-12 hours each day.

The sheriff's office grew concerned about the couple's chance of survival given overnight temperatures in Inverness dropped into the 30s over the past three to four days.

At Saturday's press conference, Schneider said everyone behind him was "ecstatic" over the discovery of the couple.

"Please keep Carol and Ian's families in your thoughts as they start this recovery process."

Sons breathe a sigh of relief

At an impromptu press conference outside of Marin General Hospital on Saturday evening, stepbrothers Jonas Irwin and Jonathan Kiparsky were beyond relieved to find their parents were alive and well.

"This is the best possible ending," said Jonas Irwin, who was raised in Palo Alto and now lives in Livermore. "Our parents are scratched up a little bit, they're probably dehydrated, a little bit of hypothermia, but for the most part, they're in reasonably good health and they'll probably be out of the hospital in 24 hours."

Jonas Irwin was at home when he received an unexpected text message from Schneider that said, "We found them."

"I'm thinking, initially, 'Alright we have bodies and this is better than nothing,'” said Jonas Irwin. But when he learned that his parents were alive, he screamed.

"I'm absolutely ecstatic to see my mother joking with me," said Jonathan Kiparsky, who flew out to the Bay Area from Boston on Tuesday to watch over the search and rescue operations. "To see Ian, who's as close as you can get to a father to me, making the same old wisecracks — he's talking about the old blues song they were singing, about drinking muddy water and (falling) asleep down in a hollow long."

After their family reunion, the stepbrothers learned more about how their parents wound up lost.

"They went out on Valentine's Day to look at the sunset and it got dark, said Jonathan Kiparsky. "They took a wrong turn and they found themselves in trouble and they kept going."

According to Jonathan Kiparsky, the two were just on the other side of a road, but blocked by a thicket. Jonas Irwin also said how the couple survived on nothing but water from a nearby puddle and parts of a fern for sustenance for eight days.

"My dad told me he was having dreams about a water hose," Jonas Irwin said.

After experiencing what seemed like an inevitable end for the couple, Jonas Irwin said there's only one thing his parents want to do: "Eat."

The two stepbrothers were also overwhelmed with gratitude for all the agencies and friends that offered their support.

"Thank you to everyone, everyone who was thinking about them, who was searching for them, who has reached out to me and my family about them — thank you," Jonathan Jonathan Kiparsky said. "There are gonna be parties in Palo Alto I can tell you that. The town is gonna light up when they roll in."

Neighbors of Carol Kiparsky and Ian Irwin said they were overjoyed when they learned the couple were found alive on Saturday.

"This is the best birthday present of my life! This is the greatest gift," Connie Jo Cotton said of the news, which arrived on Saturday morning, the day before her birthday.

Cotton said she has friends who were part of the rescue effort and she received a phone call at 10 a.m. thatthe couple were safe.

"I just started crying. It's a little overwhelming," she said.

They always maintained "great hope," however. "Some of us didn't feel like they were truly lost," she said.

Carol Kiparsky and Ian Irwin were at times part of frequent gatherings in University South where they would meet at a neighbor's home. Since the couple went missing, some residents have had evening meetings to discuss their feelings and share news about the couple's disappearance, she said.

Catherine Cohen, another neighbor who frequents the neighborhood gatherings, said Kiparsky and Irwin would sometimes join them for dinners in the summer.

"I've known them for more than 10 years. They are a fixture in the neighborhood," she said. Irwin was known for strolling in his overalls and tinkering in the couple's yard; Kiparsky was always present in her garden. They were always smiling, she said.

"They are a super sweet couple. I think the only reason they are alive is their love for each other," Cohen added.

Cotton agreed. The couple's upbeat personalities also likely saw them through their ordeal, she said.

A group of the neighbors met on Friday night to share wine and news about Carol Kiparsky and Ian Irwin, Cohen said. "We've been texting constantly and sending information and getting together," she added.

On Friday, Cohen spoke to Jonathan Kiparsky, who said the family could use the neighbors' help in their garden and at a plot they kept in the community garden at Eleanor Pardee Park, she said.

The family was thinking about a memorial service, she said.

Their mailbox has already been filled with cards, Jonathan Kiparsky told Cohen.

When she learned Saturday morning that the couple were found, she cried. "It's been such a long week. It's nice to be able to breathe and not walk past the house and have this overwhelming feeling of sadness," she said.

Cotton said that as connected as the block is, the neighbors will be even closer now after this experience. When Carol Kiparsky and Ian Irwin return, their neighbors plan to have a big party for them.

"We're going to get a big 'Welcome Home' banner," she said.

These local restaurants are donating meals to Bay Area residents in need. Here's how to help.
By Elena Kadvany | 6 comments | 10,849 views

Coronavirus: Plan ahead now for a big outbreak
By Diana Diamond | 18 comments | 3,926 views

Will the Coronavirus Save Lives?
By Sherry Listgarten | 29 comments | 3,743 views

The first few seconds after awakening; before I remember the virus
By Chandrama Anderson | 0 comments | 807 views