Controlled burn began on Feb. 18 and was expected to end Feb. 21, but continues this week 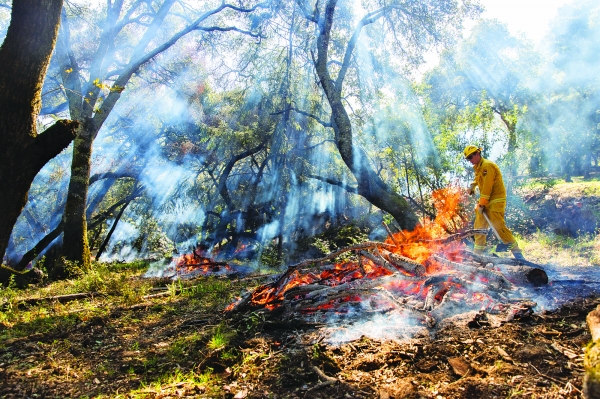 Nicholas Gurr, a California Department of Forestry and Fire Protection firefighter one, keeps the fire to the pile of burned logs during a controlled burn at the entrance of Huddart Park in Woodside. Photo by Magali Gauthier/The Almanac. 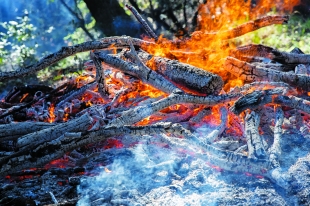 Ash, wood and fire during a controlled burn at the entrance of Huddart Park in Woodside. Photo by Magali Gauthier/The Almanac.

The California Department of Forestry and Fire Protection is burning a few more piles of debris at Huddart Park on Kings Mountain Road this week, according to spokeswoman Cecile Juliet.

"We're about halfway through the 15 piles that we have left," Juliet said. "The smoke isn't what it was last week. In fact, compared with a project we are doing in Santa Cruz County, there isn't any smoke at all."

The work is the final stage of the Kings Mountain Road Emergency Shaded Fuel Break project authorized by a state of emergency declared by Gov. Gavin Newsom and mandating that 35 high-risk areas across the state receive immediate wildfire mitigation work, according to a Feb. 13 San Mateo County Fire Department news release announcing the controlled burn.

The controlled burn began on Feb. 18 and was expected to be completed by Feb. 21, according to the fire department release.

Crews were burning trees that fell victim to sudden oak death as well as debris from recent project work.

The burn was a pile burn rather than a broadcast burn, according to Cal Fire forester Sarah Collamer, meaning that Cal Fire was burning material that was cut up and stacked in piles. The department tweeted on Feb. 18 that it has 100 debris piles to burn this week.

"We do this very often in Santa Cruz County compared with San Mateo because the air quality district there is more permissive," she said.

Permission is also needed from the Bay Area Air Quality Management District anytime material is burned in the open air. The district has stopped charging fees to encourage the reduction in fuels that can ignite in a wildfire.

The agencies that were burning have to do a study before proceeding to make sure they aren't damaging the environment, Collamer said.

People who see smoke coming from the Kings Mountain Road area are being asked not to report it, according to the fire department release.

A Pragmatic Approach to A Trillion Trees
By Sherry Listgarten | 4 comments | 4,090 views

Singapore's oldest cafe was about to open in Palo Alto. Then, the coronavirus hit.
By Elena Kadvany | 1 comment | 3,986 views

Repairing a Disagreement with your Beloved & “Physical” vs. “Social” Distancing
By Chandrama Anderson | 2 comments | 2,760 views

The University of California’s flexible policies during COVID-19
By John Raftrey and Lori McCormick | 6 comments | 2,683 views