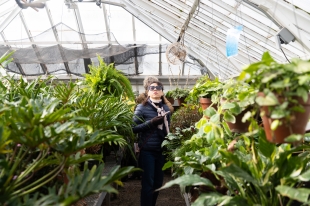 Tracy Liu looks around the north greenhouse during a guided greenhouse tour at Filoli Historic House and Garden in Woodside on Jan. 19. Photo by Magali Gauthier.

Woodside's historic Filoli estate might be equally well known for its sprawling, lush gardens as for its stately 1917 Georgian revival mansion. But other, more humble structures on the grounds fill an essential role in making the estate what it is. Filoli's greenhouses are central to the creation and maintenance of the property's 16-acre gardens.

Visitors can get a unique behind-the-scenes look during docent-led tours of the greenhouse complex. The tours, offered year-round, provide glimpses at how Filoli's grand gardens get started, as well as a look at rare plants that you might not see elsewhere on the estate.

The bulk of the plants that start life in the greenhouses are destined for the gardens; some others are propagated for sale in the Filoli garden shop.

"Most of it (the 50,000 plants), probably 30,000 to 40,000, are the bedding plants that go into the garden for two major plantings for the spring and summer seasons. Then we propagate a lot of plants for the cutting gardens — the cut flowers that the flower arrangers use," Salyards said.

Floral displays aren't limited to Filoli's great outdoors. The mansion typically features seasonal floral arrangements in many of the rooms that are open to visitors. This winter, the mansion is showcasing orchid plants contributed by a number of local orchid groups, including the Santa Clara Valley Orchid Society and Pacific Central Branch of the American Orchid Society, as well as orchids from Filoli's greenhouses.

The greenhouse complex not only is home to young plants being raised for the gardens, but also numerous plants that need a more controlled environment: a variety of tropical plants, some succulents and delicate or historical plants.

And like the mansion itself, three of the four greenhouses in the complex are historic — dating to the early 1920s, Salyards said, noting that only the propagation greenhouse is newer, built in 1985, though the other greenhouses have had some renovations.

The main greenhouse is the biggest in the complex and is dedicated to tropical plants, a purpose which goes back to the Bourns and the Roths, the two families that lived on the Filoli estate in the early and mid-20th century, according to notes used by greenhouse tour guides. Both families used this greenhouse to keep tropical plants that would then be displayed in the house.

Its three rooms shelter tropical plants with various shade and temperature requirements. One room houses orchids, including plants that the Roth family brought back from Hawaii, according to the tour notes. Another of the rooms is home to plants such as anthuriums, ginger, begonias and tropical vines, again with some plants from the Roth era. The third room has shade-loving tropicals including philodendrons and ferns, Salyards said.

The oldest plant in the complex, he said, is a cycad (which resembles a low-growing palm tree) that dates back to the Bourn family, who built Filoli. Due to its large size, the plant had to be moved from the main greenhouse and into the production greenhouse, where it's taken up permanent residence. "It never gets moved because it's huge," Salyards said.

Tours offer a chance to see this roughly century-old plant, along with other permanent or longterm greenhouse residents that don't usually make it out to public view, for a variety of reasons.

"We have collections of air plants — phylandias — that have been mounted in the greenhouses, so they live on a piping system that we have covered in moss," Salyards said, noting that the area also includes some carnivorous plants.

"Sometimes there are plants that are historic that may have such a short blooming window that you may only catch them as part of a greenhouse tour. They won't necessarily make it down to the mansion every year," he said.

Though the winter weather means Filoli's gardens themselves aren't at their showiest right now, preparations are well under way for the big blooming seasons to come —spring and summer —so there's plenty of activity at the greenhouse complex.

"They'll see some of the spring annuals that we're growing for display pots. The tail end of the spring season are pansies that we grow for potting into terra cotta pots that will go out into the garden. Very soon, within the next couple weeks, we'll start propagating seeds and cuttings for the summer display," Salyards said of the tour.

Currently on standby in the greenhouse complex area: roughly 3,000 containers of spring bulbs that will be brought down into the gardens as they begin to bloom.

The tour also includes a peek at the headhouse, a structure that's not a greenhouse, but where seeds are sown, and which also serves as the headquarters for the horticultural staff.

Visitors to the greenhouses can pick up some insider tips on how Filioli's staff mixes potting soil and fertilizes plants, and controls pests — a particular issue for greenhouses, Salyards said.

"These environments we create that are hot and humid are just perfect for bugs, and (we talk about) what we do to address those, which a lot of people face in their houses with houseplants, too. There's a lot of good, fun information," he said.

Singapore's oldest cafe was about to open in Palo Alto. Then, the coronavirus hit.
By Elena Kadvany | 1 comment | 4,420 views

A Pragmatic Approach to A Trillion Trees
By Sherry Listgarten | 4 comments | 4,114 views

Repairing a Disagreement with your Beloved & “Physical” vs. “Social” Distancing
By Chandrama Anderson | 2 comments | 2,778 views