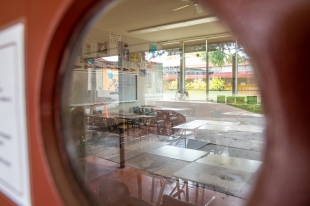 Update: The San Mateo County health department issued an order today, March 13, to close all schools in the county for three weeks starting Monday, March 16. The order applies to all public, including charter, and private institutions that teach students in transitional kindergarten through 12th grade, along with adult schools operated by public school districts and programs for special education students up to age 22.

The county is encouraging school districts to implement distance-learning models that could offer online content, paper packets, extended readings and research, at-home projects and other options, if feasible. School facilities may be used by faculty and staff to manage distance-learning learning efforts.

Several local public school districts will close their campuses to students, and move to distance learning, for the next several weeks in response to the growing spread of the novel coronavirus, known as COVID-19, across the Bay Area. The World Health Organization (WHO) declared the outbreak of the respiratory illness a pandemic on Wednesday, March 11.

Sequoia Union High, Portola Valley, Menlo Park City and Woodside Elementary school districts have all made announcements since late yesterday afternoon, Thursday, March 12, that they would close for in-person classes starting next week and move to distance-learning options. There are about 17 schools across the four districts' campuses.

The Sequoia district, which serves nearly 10,000 students, will begin distance learning, using an online platform called Canvas, on Monday, March 16, according to an email to district families early Friday morning. The district is "hopeful" it can resume in-person classes after spring break, which begins March 30. If the district determines it can't reopen classrooms on April 6, it will notify families by April 3.

Portola Valley district schools are on a minimum-day schedule today to allow teachers to prepare instructional materials for distance learning, which will begin on Wednesday, March 18, according to the district website. Teachers at the district's two schools, Ormondale and Corte Madera Schools, will also prepare distance-learning materials on March 16 and 17. The campuses will be closed to students through the end of spring break on April 5.

Superintendent Roberta Zarea noted in an email to parents on Thursday that district staff will still continue to work on campuses to develop and implement distance-learning plans, while adhering to "social distancing protocols" to protect their safety.

"On a personal level, I empathize with the disruption that this will cause to your lives," Woodside district Superintendent Steve Frank told parents in a late Thursday afternoon email. "I believe strongly in protecting the health and safety of everyone in the school community, and this decision, in my opinion, is for the greater good."

Although Las Lomitas Elementary School District officials have not announced they will close its two schools, which are in Atherton and Menlo Park, the district plans to close schools on Monday, March 16, to allow staff to prepare for potential school closures and subsequent distance learning. Superintendent Beth Polito sent a survey to district parents on Tuesday to determine families' hardware and internet connectivity needs, she said in a Wednesday email to The Almanac.

The Menlo Park district announced plans on Wednesday, March 11, to offer families the option to choose to either have their children complete coursework from home or continue attending in-person classes, starting next week. The district's school board voted unanimously during a regularly scheduled Thursday night meeting to reverse this decision, instead shutting down schools beginning next week. In an email to families Thursday evening, Superintendent Erik Burmeister said the district plans to send distance-learning directions to families by end of day on Monday.

• On Wednesday, Menlo College in Atherton, which serves about 850 students, announced it will move to online instruction starting on next Wednesday and classes will be canceled next Monday and Tuesday.

• Menlo School in Atherton announced on Thursday that it is closing its campus effective immediately. The closure of the school, which serves students in grades six through 12, will run at least through the end of spring break on April 13.

• Sacred Heart Schools: The private Atherton school announced Wednesday that beginning on Monday, the school will move to institute online instruction and tentatively plans to reopen on April 14.

• Woodside Priory, St. Raymond and Nativity schools: Three local Archdiocese of San Francisco schools announced earlier this week they would close for two weeks due to the virus threat. The announcement followed the confirmation that a student at one of the archdiocese's San Francisco schools tested positive for COVID-19.

Although children generally appear to be less affected by severe symptoms and tend to develop mild cases of the virus, they are still able to spread it to others, including people who have more severe responses to the virus, experts such as Dr. Arthur Reingold, an epidemiologist at the University of California at Berkeley, have noted.

There are more than 130,000 confirmed cases of the virus worldwide as of Friday morning.

Find comprehensive coverage on the Midpeninsula's response to the new coronavirus by the Almanac, Mountain View Voice and Palo Alto Online here.

Singapore's oldest cafe was about to open in Palo Alto. Then, the coronavirus hit.
By Elena Kadvany | 1 comment | 4,368 views

The University of California’s flexible policies during COVID-19
By John Raftrey and Lori McCormick | 6 comments | 2,693 views